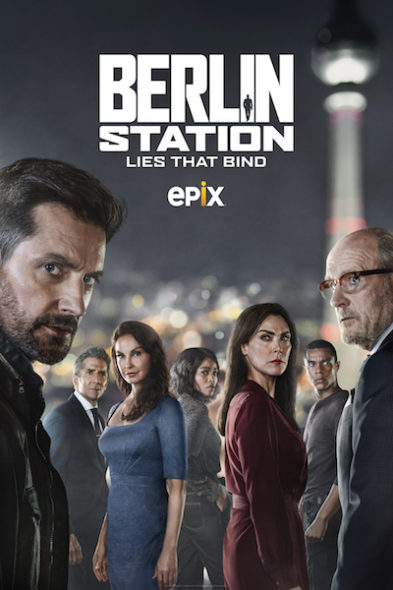 An EPIX spy drama, Berlin Station stars Michelle Forbes, Richard Armitage, Richard Jenkins, Rhys Ifans, Leland Orser, Ashley Judd, Keke Palmer, and Ismael Cruz Córdova who joins as the CIA agent Rafael Torres. James Cromwell joins on a recurring basis. The series centers on the CIA’s installation in Berlin. Season three unfolds during an 11-day timespan. In Eastern and Central Europe, Chief of Station Valerie Edwards (Forbes) guides her team through the high-stakes relationship between Russia, the United States, and its vulnerable NATO allies. The Kremlin could be involved in some foul play with the potential to wreak havoc with international relations.

Since they are not part of the Nielsen ratings system, it is difficult to predict whether EPIX will cancel or renew Berlin Station for season four. Last year, I correctly predicted a renewal, because EPIX is trying to build up its programming slate. This time, I’m not so sure. Sometimes, these limited series on niche networks aren’t intended to be long-running. Until we know whether Berlin Station will be cancelled or renewed for season four, I’ll keep an eye on the trades and press releases and update this page with any developments. Subscribe for free updates on Berlin Station cancellation or renewal news.

4/1/19 update: Berlin Station has been cancelled so there won’t be a fourth season.

What do you think? Were you hoping that the Berlin Station TV show would be renewed for a fourth season? Are you sorry that EPIX cancelled this TV series, instead?

Berlin Station brilliant….
Everything about it done perfectly… Will miss …..

You cancel all the really great shows and leave the crappy ones running. What the hell is wrong with you people? Berlin Station was absolutely awesome.

With this extraordinary level of quality programming, with excellent writing and state-of-the-art and beyond acting, I’m stunned to see this unexpected, unwanted and poorly planned ending.

this could have overtaken ‘Homeland’. For f sake whose empty mind-fxxxed idea was that cancelled fourth season

Seriously who do I write to, to get them to make series 4. This was one of thee best series I’ve ever seen. The writers are genius, backed up with 1st class acting. Too many lose ends……I understand Stephen haha. But season 4 is a must