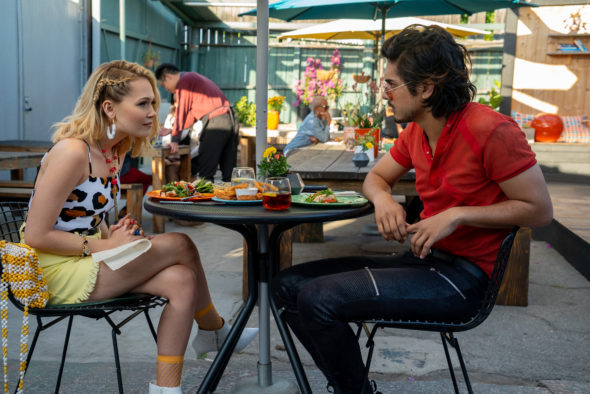 Will there be another season of Now Apocalypse? Recently, creator Gregg Araki spoke with IndieWire about the future of the cancelled Starz TV show.

The surreal comedy series centers on a group of young people who move to Los Angeles in search of fame, love, and sex. The cast includes Avan Jogia, Kelli Berglund, Beau Mirchoff, and Roxanne Mesquida.

In an interview with IndieWire, Araki revealed he’s trying to find a new home for Now Apocalypse:

We are shopping for a new home since the show’s cheap, and with the most amazing cast and incredibly passionate fanbase. The fan reaction let me know that the people who watched it got it exactly as I hoped. The show really is a dream come true for me. I love it so much and am so proud of the work we all did together. And regardless of what happens, I’m happy knowing that it will live forever in the streaming/sharing cosmos.”

I’m still not done with ‘Now, Apocalypse.’ I started writing it in November of 2017 — like full-time writing the 10 episodes — then we shot it in the summer of 2018, posted all through the end of the year, and then the beginning of this year was the release and all the publicity, and now I’m writing Season 2. I haven’t had a day off since before we started, and I’m not used to that kind of schedule.”

What do you think? Are you a fan of Now Apocalypse? Would you watch a second season?

I dont know why I had not watched it all this while !!! I loved it …it took me 2days to watch the entire 10 episodes and almost cried when I was just about watching the last episode. Please.. Please…Please… when is season 2 coming ?

Definitely need more of this show!!!

I would go nuts over a second season of now apocalypse