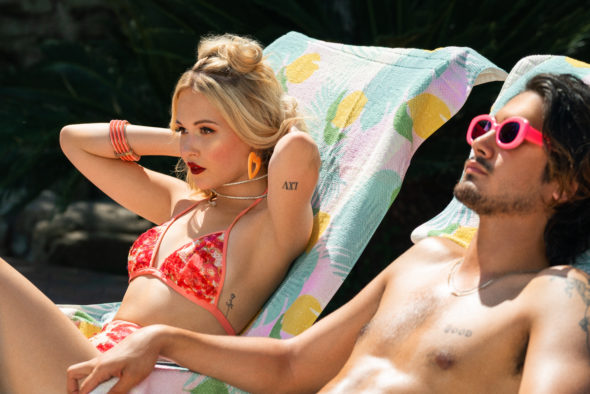 Is now the right time for the first season of the Now Apocalypse TV show on Starz? As we all know, the Nielsen ratings typically play a big role in determining whether a TV show like Now Apocalypse is cancelled or renewed for season two. Unfortunately, most of us do not live in Nielsen households. Because many viewers feel frustration when their viewing habits and opinions aren’t considered, we’d like to offer you the chance to rate all of the Now Apocalypse season one episodes here. *Status update below.

A surreal Starz comedy, Now Apocalypse stars Avan Jogia, Kelli Berglund, Beau Mirchoff, and Roxanne Mesquida. The story centers on Ulysses (Jogia) and friends Carly (Berglund), Ford (Mirchoff), and Severine (Mesquida). In one way or another, each of them is in pursuit of fame, love, and sex, as they try make their way in Los Angeles. Amidst all of their romantic pursuits, Uly starts to have dreams which strike him as premonitions that something dark and dangerous is really going on — or maybe he’s just smoking too much pot.

What do you think? Which season one episodes of the Now Apocalypse TV series do you rate as wonderful, terrible, or somewhere between? Should Starz cancel or renew Now Apocalypse for a second season? Don’t forget to vote, and share your thoughts, below.

*7/26/19 update: Starz has cancelled the Now Apocalypse TV show after one season.

Should come back as im sure it has a cult like following. Like Donnie Darko got rereleased. Please someone fund this with the same exact actors and production crew. I just discovered it this morning at 3am here it is 738am and i don’t want to finish the rest of the season because i know there’s not a season two and that pisses me off and i don’t want my experience to end

I am so upset that the story doesn’t continue! There are so many micro cliffhangers and unknowns…what will Severine uncover in Roswell? Will Uly start connecting his dream to the others who have been having the same “hallucination”? What is this with the baby aliens?? Was Cleopatra an alien ? Who or what is Gabriel??? The trumpet is just too much of a coincidence! So much more too is left unanswered…Starz really left fans with a tease here, give us a really cool, neat new show and with a finale of mystery and unanswered questions and done, nothing more, that’s… Read more »