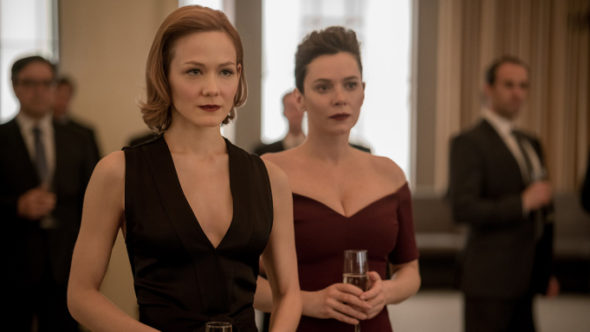 Starz has renewed Steven Soderbergh’s critically-acclaimed drama series, The Girlfriend Experience, for a third season of 10 episodes. Some had assumed that the series had been cancelled since the second season finished aired a year and a half ago, in December 2017. There’s been no word on when season three will debut.

Here’s some information from Starz about the upcoming third season:

The STARZ Limited series “The Girlfriend Experience” was a reimagining of Steven Soderbergh’s 2009 critically acclaimed movie of the same name. Season one of “The Girlfriend Experience” followed Christine Reade (Riley Keough), a second-year law student. Working hard to establish herself as an intern at a prestigious law firm, her focus quickly shifts when a classmate introduces her to the world of transactional relationships. The second season of the anthology series followed two parallel stories each focusing on entirely new characters, relationships, plotlines and locations while exploring the price of intimacy and its emotional consequences. Starring Anna Friel, Louisa Krause and Carmen Ejogo, the storylines for season two were juxtaposed between Washington, D.C. and New Mexico.

Vice President of Original Programming Samantha Offsay is the Starz executive in charge of the third season of “The Girlfriend Experience.”

What do you think? Have you watched The Girlfriend Experience TV show? Will you watch season three on Starz?

In which time start the shooting of girlfriend experince season1

Great , i was wondering if it was going to be a season 3 i actually thought it must of been cancelled because i havent found any new information about it until now!