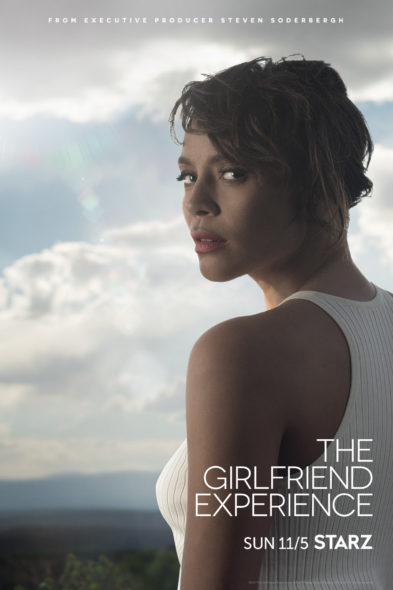 Is experience still the best teacher? Has The Girlfriend Experience TV show been cancelled or renewed for a third season on Starz? The television vulture is watching all the latest cancellation and renewal news, so this page is the place to track the status of The Girlfriend Experience, season three. Bookmark it, or subscribe for the latest updates. Remember, the television vulture is watching your shows. Are you?

Will Starz cancel or renew The Girlfriend Experience for season three? Because it is an anthology series, because the episodes are only 30 minutes, and because it is limited (i.e. the seasons are shorter), The Girlfriend Experience requires less of a commitment from its cast. Its per episode costs must be less than those for a typical hour-long drama, so Starz’ expectations may well be lower. Also, having Steven Soderbergh as an executive producer lends a certain cachet. All of that, combined with better ratings than the first season’s, I think the show will be renewed. Subscribe for free updates on The Girlfriend Experience cancellation or renewal news.

7/26/19 update: Starz has renewed The Girlfriend Experience TV show for a third season.

What do you think? Are you glad that The Girlfriend Experience TV show has been renewed for a third season? How long do you think this Starz TV series will last?

I hope The Girlfriend Experience will continue for Season 3. I like the storyline.
And the sexual situations. But I think season 3 will determine if the show can stay fresh and interesting.

I loved season 1, with Riley K and cast. Stay with them and her and give her a bit more personality. She’s too flat. But enjoyed her taking charge towards the end of her life at the law firm although I’m not remembering it as much now. But bring season 1 back for a Season 3.

I love Good Behaviour ,so good ,look forward to watching the 3season,please tell me your making another season ,please !Best show ever,I beg you to return it !!

Season 2 was to me horrible, why they ran with two separate stories made no sense. I could care less about that witness protection garbage. If they were to stack it against season one you needed apples to apples. The political storyline was eqally boarderline, people watch because they wanted a progression of why woman does this work and how she survives the challenges it brings. Like the growth on season one. Season two should have been a new girl or the progression of the character which Riley nailed. It was disappointing not to keep it as an exploration of… Read more »

The first season was amazing I can honestly say I was disappointed with season 2 and have little hope for season 3.

Great show… I like the plot lines… pls I hope it’s renewed,,,,

Great show… I like the plot lines… pls I hope it’s renewed,,,,

most boring show on cable

The Girlfriend Experience is the perfect show to binge because it’s a bit like a mosaic – each episode has these rewarding little moments but they’re not self-contained, it’s only when it starts to piece together does it tell an enriching story.