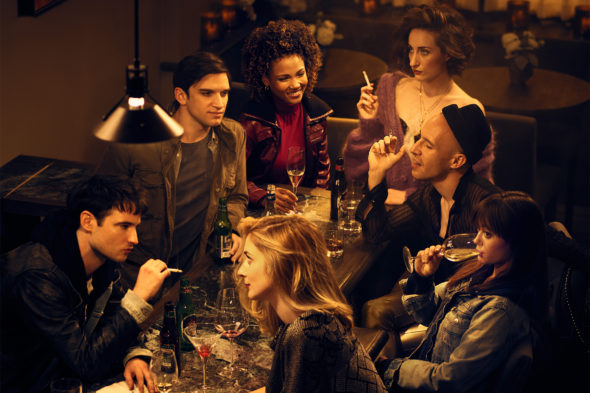 TV show description:
From creator Stephanie Danler, who authored the book of the same name, the Sweetbitter TV show centers on Tess (Purnell), who moves to New York City in search of a new life.

Tess is just 22 years old when she hits town. Soon though, she is selected to train at one of the city’s top restaurants. Although she thinks she has landed in a safe place, with a reliable income, Tess quickly gets caught up in the high-energy chaos of the big city dining scene.

The story kicks off in 2006, alongside the path of the L-train, in settings including Manhattan fine dining spots, the dive bar where the back-of-house lets loose after a shift, a Williamsburg bodega, and a cramped East Village apartment. Tess came to New York in search of more from life. Whether life in the city will help her find herself, or cause her to lose herself, remains to be seen.

During her journey, it is Tess’s restaurant co-workers who leave an indelible mark on her life. Along with the backwaiters, servers, bartenders, and dishwashers, she will learn to navigate adulthood and all its sticky trappings. Along the way, they become her new, chosen family, and Tess feels like she finally belongs.

A dazzling, daring bartender, Jake (Sturridge) stirs something in Tess that she’s never felt before. Then there is Simone (FitzGerald), beautiful, confident, and with an easy air of authority. It is not long before Tess ends up as the third point in their triangle.

Meanwhile, Will (Jonigkeit) is a backwaiter, who is assigned to Tess during her training. He ends up as drawn to her as she is to Jake.

Ariel (Epstein) is another backwaiter, but that’s just her day job. she’s also a DJ and very close to Heather. Heather is a server who has put off attending law school and is just trying to avoid her academically-minded parents and their questions about her choices.

Rounding out the staff are backwaiter Sasha (Danivar), a Russian immigrant; Becky (Tannenbaum) the bright and beautiful hostess; Nicky (Gearhart) a bartender who lives a more normal life than most; Manny (Gutierrez) the prep cook; Santos (Beatos), the young dishwasher; and Scott (Saito) the handsome sous chef. Finally, there is Howard (Sparks), the restaurant General Manager — the unofficial father figure to this ragtag crew.

A love letter to New York, Sweetbitter explores sweet, sour, salt, bitterm and umami and how necessary they are to both developing a palate and just living life.

Series Finale:
Episode #14 — Bodega Cat
Tess and Jake take their relationship to the next level, causing tension with Simone; Ari feels abandoned; Will uses his power for a questionable purpose.
First aired: August 18, 2019.

What do you think? Do you like the Sweetbitter TV series? Should this Starz TV show have been cancelled or renewed for a third season?

I am heartbroken to find this show cancelled. It’s the only reason I subscribed to Starz.

I adored this series, and fell in love with every character. The stories are very much like those I’d hear from friends who worked in restaurants. Such a complete shame that Starz canceled yet another amazing series. Maybe if they’d advertised it better, it would have gotten the audience numbers it deserved.

I recently binge watched all 14 episodes and I loved it. I think Starz did a horrible job advertising for the show and no one knew about it so they never tried it. I want a season 3

Renew please is the best ❤️

I hope you renew SweetBitter it is very
intriguing, exciting and beautifully set!

Loved it very relatable. Cast is amazing. Must see more…

Renew this show please! There is nothing like it on TV, I love it.

I read the book. The TV show is good, but I think it will have trouble finding an audience especially when Starz calls six 30-minute episodes a “season.” The acting is good and it’s a good representation of the book which was an interesting look at the lives of professional career restaurant servers in New York and what it takes to become one of the ones who make two-hundred grand a year or more.

Jeffrey B Waite
Reply to  Eric