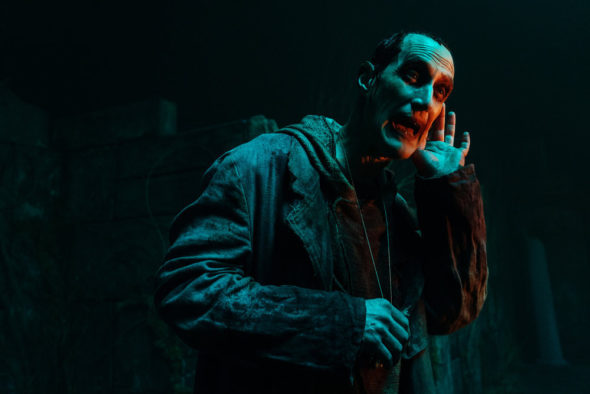 Will Van and company be victorious in the fourth season of the Van Helsing TV show on Syfy? As we all know, the Nielsen ratings typically play a big role in determining whether a TV show like Van Helsing is cancelled or renewed for season five. Unfortunately, most of us do not live in Nielsen households. Because many viewers feel frustration when their viewing habits and opinions aren’t considered, we invite you to rate all of the fourth season episodes of Van Helsing here. *Status update below.

A Syfy horror-fantasy series, Van Helsing, stars Kelly Overton, Jonathan Scarfe, Christopher Heyerdahl, Neal McDonough, Vincent Gale, Rukiya Bernard, and Aleks Paunovic. Joining the cast are Tricia Helfer, Richard Harmon, Nicole Munoz, Keeya King, and pro-wrestler Big Show. The show centers on Van Helsing descendent Vanessa “Van” Helsing, who awoke from a coma to find vampires had overtaken the world. A prime target for the vampires, she’s also humanity’s last hope with her immunity to vampires and ability to turn them into humans. In season four, the first of four vampire elders has been freed and legend has it that when their four Totems are combined, the Dark One will be resurrected. It’s a race against time as Van and her ragtag group of heroes face off against the forces of darkness.

What do you think? Which season four episodes of the Van Helsing TV series do you rate as wonderful, terrible, or somewhere between? Do you think that Van Helsing on Syfy should be cancelled or renewed for a fifth season? Don’t forget to vote, and share your thoughts, below.

I love vampires shows & movies. This is a great show & I love the actors & actress’s that play in van helsing. I hope they bring back Vanessa’s sister, that was soo sad but can’t wait to see what’s going to happen next!!! #BRINGITON!!! Love, love this show!! ❤️