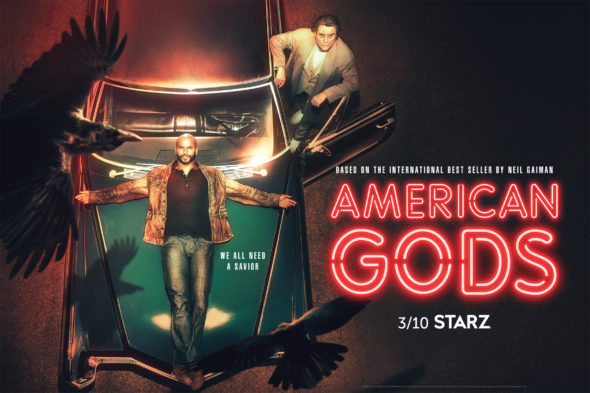 Although its linear ratings were small by broadcast standards, last year the American Gods TV show was a top-three performer for Starz. While subscription cable networks don’t rely on ad revenue, they want to run programming that helps them retain and attract subscribers. Can the second season match the first, or even beat it? Will American Gods be cancelled or renewed for season three? Stay tuned. *Status update below.

For comparisons: The first season of American Gods on Starz earned a 0.28 rating in the 18-49 year-old demographic and 714,000 viewers.

What do you think? Do you like the American Gods TV show? Should this Starz TV series be cancelled or renewed for a third season?

3/15/19 update: Starz has renewed American Gods for a third season.

American gods season1= phenomenal best thing I had seen in years. American Gods season 2= Complete abomination that should be costing a lot of people their jobs and made me cancel my Starz subscription.

American Gods is one of my favorite books. I dithered a bit with watching the series because shows and movies nearly invariably butcher the story.

I did purchase a Starz subscription via Amazon Prime and begin the series after many assurances from my husband that I would not be disappointed.

I am so glad I did. Starz has done a fabulous job in remaining true to the spirit of the book. Thank you! Please renew this one for the rest of my life.