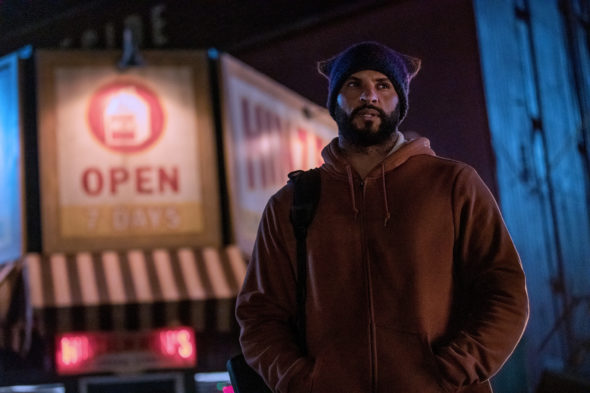 Can the gods work things out?  Has the American Gods TV show been cancelled or renewed for a fourth season on Starz? The television vulture is watching all the latest cancellation and renewal news, so this page is the place to track the status of American Gods, season four. Bookmark it, or subscribe for the latest updates. Remember, the television vulture is watching your shows. Are you?

Airing on the Starz cable channel, American Gods stars Ricky Whittle, Ian McShane, Emily Browning, Yetide Badaki, Bruce Langley, Omid Abtahi, Ashley Reyes, Crispin Glover, Demore Barnes, Devery Jacobs, Blythe Danner, Marilyn Manson, Julia Sweeney, Iwan Rheon, Danny Trejo, Peter Stormare, Denis O’Hare, Lela Loren, Dominique Jackson, Wale, Herizen Guardiola, and Eric Johnson. The story centers on Shadow Moon (Whittle), Mr. Wednesday (McShane), and a pantheon of gods — old and new — competing, and ready to do battle, for the hearts and minds of believers. In the third season, Shadow angrily pushes this apparent destiny away, and settles in the idyllic snowy town of Lakeside, Wisconsin — to make his own path, guided by the gods of his black ancestors, the Orishas. But he soon discovers that this town’s still waters run deep, and dark, and bloody, and that you don’t get to simply reject being a god. The only choice — and a choice you have to make — is what kind of god you’re going to be.

The third season of American Gods averaged a 0.04 rating in the 18-49 demographic and 1.70 million viewers. Compared to season two (which aired in 2019), that’s down by 65% in the demo and down by 49% in viewership. Find out how American Gods stacks up against other Starz TV shows.

Will Starz cancel or renew American Gods for season four?  Planning for season four was underway back in 2019 so, despite a big decline in the traditional ratings (and theoretically, viewer interest), I think it still has a chance of being renewed. I’ll update this page with breaking developments. Subscribe for free alerts on American Gods cancellation or renewal news.

What do you think? Were you hoping that the American Gods TV show would be renewed for a fourth season? How do you feel that Starz cancelled this TV series, instead?

I would like to see a return of American Gods

After that Season Finale (S3) THERE BETTER BE A SEASON 4!!! That is the cliffhanger from hel!

They are showing spoilers for season 4, doesn’t that mean it’s a go?

This us an AWESOME show I not only want a season 4 but 6 more AFTER!!

We want a 4th season of American Gods. The dedicated viewers deserve to see a proper ending for this series.

I hope they have a season 4 , I’m wanting to see shadow moon in Godly action … not just to find out hes belquist and Odin’s child or something and for them to kick the new gods a double s and then it end .. I hope to see some more power and story continue on.