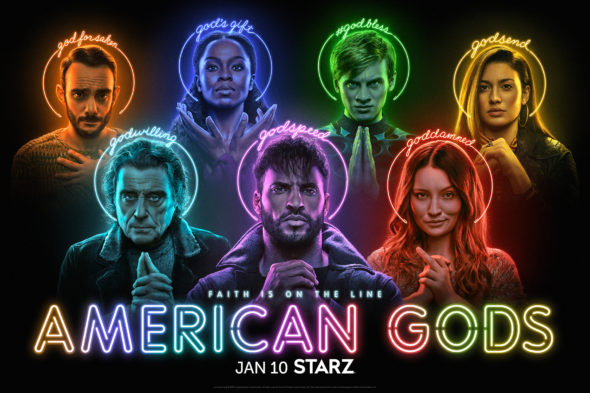 Back in 2019, author Neil Gaiman said that early work was underway on a fourth season of the American Gods TV series. Will it come to fruition? Will this Starz series be cancelled or renewed? Stay tuned. Status Update Below.

American Gods stars Ricky Whittle, Ian McShane, Emily Browning, Yetide Badaki, Bruce Langley, Omid Abtahi, Ashley Reyes, Crispin Glover, Demore Barnes, Devery Jacobs, Blythe Danner, Marilyn Manson, Julia Sweeney, Iwan Rheon, Danny Trejo, Peter Stormare, Denis O’Hare, Lela Loren, Dominique Jackson, Wale, Herizen Guardiola, and Eric Johnson. The story centers on Shadow Moon (Whittle), Mr. Wednesday (McShane), and a pantheon of gods — old and new — competing, and ready to do battle, for the hearts and minds of believers. In the third season, Shadow angrily pushes this apparent destiny away, and settles in the idyllic snowy town of Lakeside, Wisconsin — to make his own path, guided by the gods of his black ancestors, the Orishas. But he soon discovers that this town’s still waters run deep, and dark, and bloody, and that you don’t get to simply reject being a god. The only choice — and a choice you have to make — is what kind of god you’re going to be.

What do you think? Do you like the American Gods TV series on Starz? Should it be cancelled or renewed for a fourth season?

This season was trash. Throw it all in the garbage. No Anansi or Mad Sweeny, then no need for another season of this drivel.

Glad it’s gone. Should’ve kept Anansi on. Can’t have a story without the storyteller.

Extraordinary series. It would be shame if it didn’t get a fourth season. But then my opinion doesn’t count since I’m 73 and no one cares about anyone’s opinions for tv or movies if they surpass that magical age of 49. Apparently when someone reaches the age of 50 you don’t possess a value. To all those people who take surveys, “screw you.”

Getting rid of Mr. Nancy was a serious mistake. As well as the other character changes and departures. I was really rooting for this show and genuinely liked it, I love all human mythology so this show was a no brainer for me. Sad to say it may not make it passed season 3. Thanks Eglee.

Mr. Nancy’s speech from last season was the only viral moment, and you get rid of the character. The current ratings says it all.

They have totally destroyed the show. Not bringing back mad sweeny was a disastrous mistake. The dynamic between him and Laura moon was fantastic and there was so much more that could of been done with his character and with the story with him and Laura moon. There was so much left unsaid, questions unanswered. It was literally just the beginning for mad sweeny and Laura moons story, it was just the beginning for mad sweeny character even without her. So much could of been built on his character and how you left it on season 2. He was a… Read more »

I think they gonna bring him back