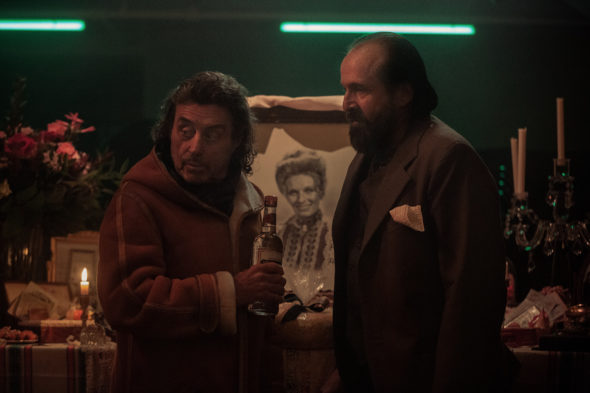 Will the fight continue? After huge season-to-season declines in the ratings, Starz has cancelled the American Gods TV series. There won’t be a fourth season but, the show may still get some kind of a conclusion.

An adaptation of Neil Gaiman’s novel, the American Gods series stars Ricky Whittle, Ian McShane, Emily Browning, Yetide Badaki, Bruce Langley, Omid Abtahi, Ashley Reyes, Crispin Glover, Demore Barnes, Devery Jacobs, Blythe Danner, Marilyn Manson, Julia Sweeney, Iwan Rheon, Danny Trejo, Peter Stormare, Denis O’Hare, Lela Loren, Dominique Jackson, Wale, Herizen Guardiola, and Eric Johnson. The story centers on Shadow Moon (Whittle), Mr. Wednesday (McShane), and a pantheon of gods — old and new — competing, and ready to do battle, for the hearts and minds of believers. In the third season, Shadow angrily pushes this apparent destiny away, and settles in the idyllic snowy town of Lakeside, Wisconsin — to make his own path, guided by the gods of his black ancestors, the Orishas. But he soon discovers that this town’s still waters run deep, and dark, and bloody, and that you don’t get to simply reject being a god. The only choice — and a choice you have to make — is what kind of god you’re going to be.

“Everyone at Starz is grateful to the dedicated cast and crew, and our partners at Fremantle who brought author and executive producer Neil Gaiman’s ever-relevant story to life that speaks to the cultural climate of our country,” a network spokesperson told Deadline today.

There is talk of Gods getting some closure either via a TV movie or an “event series”. It’s unclear what the realistic chances of this wrap-up might be as the traditional ratings saw such large season-to-season declines this year. It’s not known what the delayed and streaming numbers were but, if they were impressive, Starz probably wouldn’t be pulling the plug on the show in the first place.

What do you think? Do you like the American Gods TV series? Are you sorry to hear there won’t be a fourth season on Starz? Would you like to see a wrap-up of some kind?

So disappointed & angry! The only reason I have STARZ is to watch American Gods. I LOVE this show & have watched it start to finish multiple times! If they cancel there needs to be an ending! I’m so sick of shows being canceled & never having an ending, especially this one! Without this show I have no reason to keep STARZ!

The fans warned you! You didn’t listen. Orlando Jones was one of the 3 good actors on the show!! I had no reason to watch after his departure. Ian McShane is always awesome and well be in his next project!!

Funny this article doesn’t even mention Orlando as a cast member, but we all know his departure is the real reason why this show is being cancelled.

Here we go again huh Starz??!!!?? Why are you canceling American Gods without a proper ending?? You’ve done this before, and it’s truly not the right thing to do to those of us who love love love this show! Once again, it’s all about the money with you people, even though we all know you’ve got plenty of it! And you always have that 18 to 49 age group! Haven’t you learned yet that there are other age categories that watch, and let’s be real here, the younger set isn’t interested in anything on TV, and if they do turn… Read more »

Please Starz, give us the ending we so truly deserve, don’t be like Fox when they killed off Firefly, you don’t wanna be those people. Yes maybe AG didn’t have as many people watching it, but don’t forget we just had a damn Pandemic. Ricky, Emily, and Ian deserve to show us the ending, for the true fans of Mr. Neil Gaiman beautiful story. Thank you for reading this.

STARZ! PLEASE tie it up with a decent conclusion!

It’s certainly true that AG deteriorated every season, and from the start Whittle was (by far) the weakest cast member, but it was still a great series with fantastic production. I’m sorry that there won’t be any conclusion but fully recognise that entertainment is a business. If people don’t watch (and buy) then there’s no reason for production.

I would love to see a season 4

This show was the only reason I subscribed to STARZ. While it wasn’t perfect, it certainly was beautiful. I’ll miss it.

I lost interest during season 2, but I watched anyway hoping for the spark that made season 1 so enjoyable. When Orland Jones was canned, I really had no further reason to watch.

I absolutely loved the novel. The show was ok in season 1 and “woke” itself to utter stupidity by season 3. Had the book contained all that crap I’d never have finished it. It started off good, especially the casting of Wednesday, Shadow and Sweeny, and then it just went to hell. Ultimately one of the worst adaptions I can think of (besides altered carbon which suffered the same fate). Can’t we just let good books be, without having to paint woke crap all over them?

The show was doomed after Season 1 when they fired the original showrunner Bryan Fuller. Season 2 & 3 were nowhere near as good.

This show was a great example of “good idea, bad execution”. I LOVED Odin and Mad Sweeney, but the entire rest of the cast just dragged it down. It was so bad in parts that I had to hit the fast-forward button to pass the nonsense and get to the storyline again. I quit after season 2.

I’m disappointed that American gods won’t be back for a fourth season. Horrible way for things to end. I really liked the show.

don’t know if streaming has something to do with it, but i couldn’t never understand why Starz & Showtime put up the new episode at midnight don’t on demand get count? because i haven’t watched live or DVR of American Gods or shameless all season