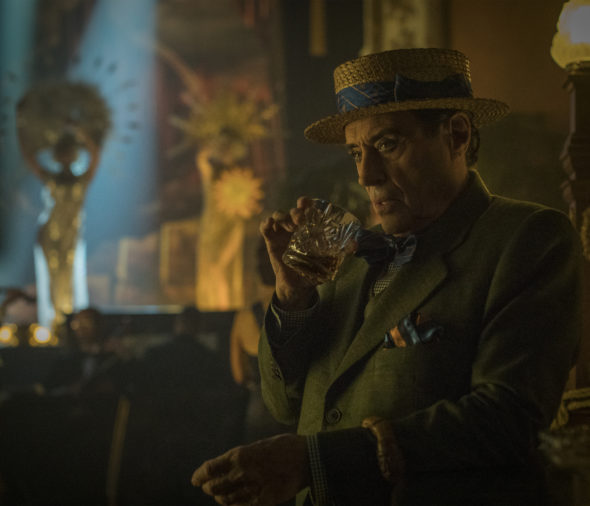 What in heaven’s name is going on? Has the American Gods TV show been cancelled or renewed for a third season on Starz? The television vulture is watching all the latest cancellation and renewal news, so this page is the place to track the status of American Gods season three. Bookmark it, or subscribe for the latest updates. Remember, the television vulture is watching your shows. Are you?

The second season of American Gods averaged a 0.10 rating in the 18-49 demographic and 334,000 viewers. Compared to the first season, that’s down by 65% and 53%, respectively. Find out how American Gods stacks up against other Starz TV shows.

Will American Gods be cancelled or renewed for season three on Starz? About a month ahead of the second season premiere, the word on the street was that a third season renewal was in the offing. We’ll have to wait and see if that rumor holds water. In the meantime, I’ll keep an eye on the Nielsens and update this page with any developments. Subscribe for free American Gods cancellation or renewal news alerts.

3/15/19 update: Starz has renewed American Gods for a third season.

What do you think? Are you glad that the American Gods TV show has been renewed for a third season? How long would you like this Starz TV series to last?

I read that the 3rd and final season of American Gods was supposed to air on STARZ starting on April 15th, 2020. But this never happened. I’d like to know what’s going on?
Has it been canceled? Or has it been merely delayed because of the Covid19 pandemic?
I’m a passionate fan of the series. And I really, really want to view the final season.
Thanks so much for any information you can give to me!