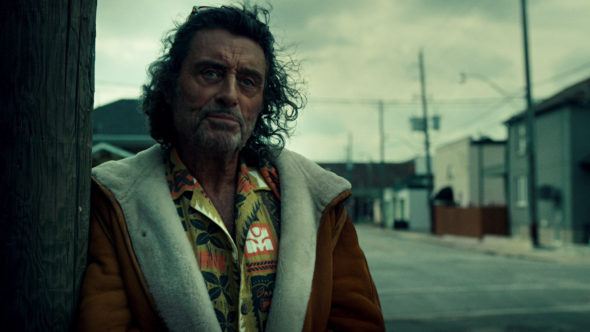 Where will Shadow’s journey take him in the third season of the American Gods TV show on Starz? As we all know, the Nielsen ratings typically play a big role in determining whether a TV show like American Gods is cancelled or renewed for season four. Unfortunately, most of us do not live in Nielsen households. Because many viewers feel frustrated when their viewing habits and opinions aren’t considered, we invite you to rate all of the third season episodes of American Gods here. Status Update Below.

A Starz fantasy drama series, American Gods stars Ricky Whittle, Ian McShane, Emily Browning, Yetide Badaki, Bruce Langley, Omid Abtahi, Ashley Reyes, Crispin Glover, Demore Barnes, Devery Jacobs, Blythe Danner, Marilyn Manson, Julia Sweeney, Iwan Rheon, Danny Trejo, Peter Stormare, Denis O’Hare, Lela Loren, Dominique Jackson, Wale, Herizen Guardiola, and Eric Johnson. The story centers on Shadow Moon (Whittle), Mr. Wednesday (McShane), and a pantheon of gods — old and new — competing, and ready to do battle, for the hearts and minds of believers. In the third season, Shadow angrily pushes this apparent destiny away, and settles in the idyllic snowy town of Lakeside, Wisconsin — to make his own path, guided by the gods of his black ancestors, the Orishas. But he soon discovers that this town’s still waters run deep, and dark, and bloody, and that you don’t get to simply reject being a god. The only choice — and a choice you have to make — is what kind of god you’re going to be.

What do you think? Which season three episodes of the American Gods TV series do you rate as wonderful, terrible, or somewhere between? Do you think that American Gods should be cancelled or renewed for a fourth season on Starz? Don’t forget to vote, and share your thoughts, below.

This show is so damn good. I not only watched it once I watched it twice for the simple fact that I cannot get enough.

First I want to say I love this show. It has a lot of deep subjects and touches on a few social issues. Too often they cancel good shows but I hope they give this more season. I could watch this every day.

I wasnt sure in season one where this was going qnd the first episode or two were a little hard to get to know/understand the characters. I was like…wait what,who? But i quickly figured it out. It is a very deep show which honestly requires full attention. I find it hard to believe [or maybe its a why] tbat season 2 didn’t do well during covid or MAYBE it’s because we were flooded with what to watch and honestly there was not a lot of hype or advertising not that i saw and i was DYING for something new to… Read more »

YES! YES! YES! After I started watching the first season I had to buy the book because it felt like a tease it’s so very good. I just finished watching what is supposed to be season 3’s finale(episode 10) and it’s a definite cliffhanger for another season leaving too many unanswered questions in the middle of the most climatic scenes that have yet to unfold. The only reason I have STARZ is to watch American Gods(and I was watching The Outlander but got tired of waiting for a new season so I lost interest). American Gods is a gold mine… Read more »

I think it is without doubt best show on Starz. Only wish they bring back Madd Sweeney . I’m definitely rooting for a season 4

Season 3 looks pretty boring … what a shame … new director is running the show into the ground. Two of the best characters; Mr. Nancy and the Leprochaun … come on new directors get some guts and let the show develop a better story line … my prediction is this the last season if they don’t pick the pace.

I also wondered were Mr. Nancy went and when is he returning! I keep thinking that Mad Sweeney has to come back too, they are both great characters and should be reunited with the cast instead of all these cameo appearances that don’t return(I for one would love to see Kristin Chenoweth return as Easter or Ēostre because she’s brilliant to watch but may require the return of both Bryan Fuller and Michael Green). When you have magic and it’s working why do people make simple complicated?

I guess you were right and I did like season 1 and 2 better than 3 and Miss mr. Nancy the second season was the best what a shame such a wonderful show I couldn’t wait to watch the new episodes now they had New Riders change the whole show guess what it got cancelled just ruined a good show thought it was great

American Gods a good show. Can work on some of its concepts, but do love the show.