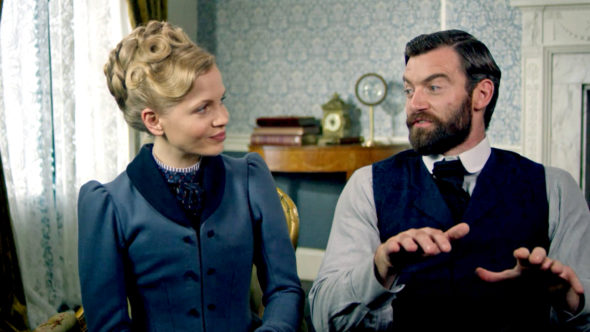 Miss Scarlet & the Duke has been renewed for a second season on PBS. The network had partnered with A+E Networks International for the first season but A+E has now left the series. Kate Phillips and Stuart Martin star in the female detective drama as Miss Scarlett and William “The Duke” Wellington, a detective team who solve cases in Victorian England.

Element 8 Entertainment and PBS Masterpiece are behind the PBS series, which will air its second season in 2022. Susanne Simpson, the executive producer of Masterpiece, said the following about the renewal of Miss Scarlet & The Duke:

“Miss Scarlet and The Duke was an instant fan favorite. Our audience couldn’t resist its light-hearted tone and the appealing characters so wonderfully portrayed by Kate Phillips and Stuart Martin. We’re delighted the show will return for a second season.”

Rachel New, the series of the writer also spoke about the series and its renewal, per Deadline. She said the following:

“I’m absolutely thrilled at the news that Miss Scarlet and The Duke will be back for a season two. I have so much in store for Duk, Eliza and her crew. With even more action, adventure and of course a nice big dollop of romance, it’s going to be a cracking season. The fans are going to love it.”

A premiere date for the second season has not yet been set.

What do you think? Are you a fan of Miss Scarlet and The Duke TV show? Do you plan to watch season two on PBS?

Should have said can’t wait to see

Can’t. A show so good that I hope to be watching season 10

I love it so much; I’ve watched the first season 3 times, but still have a long wait for season two.

Love Miss Scarlett and the Duke. Glad to see that is has been renewed.

I’m rewatching the first season, getting ready
for season 2. Have enjoyed it completely.

Enjoyed season!!! Looking forward to season 2. Thank goodness for the pbs pass where I can watch season one again.

So excited the show is coming back!!!! They need to get married and be a couple of detectives!!!

I watched the first season, and it needs some re-working. Each episode is basically the same; she gets into trouble, inspector, or the black market guy has to help her out. Then she whines about not getting credit for solving the case.

Super series I really loved it and I’m happy it will be back….not soon enough!!!!!

I was so excited to learn Season 2 is coming for Miss Scarlet and the Duke. Great show.

I absolutely LOVE Miss Scarlet and the Duke! It immediately became my favorite show! I can’t wait for Season 2 to begin here in the US.

I love Miss Scarlet and the Duke!! I was really hoping it would have a second season!