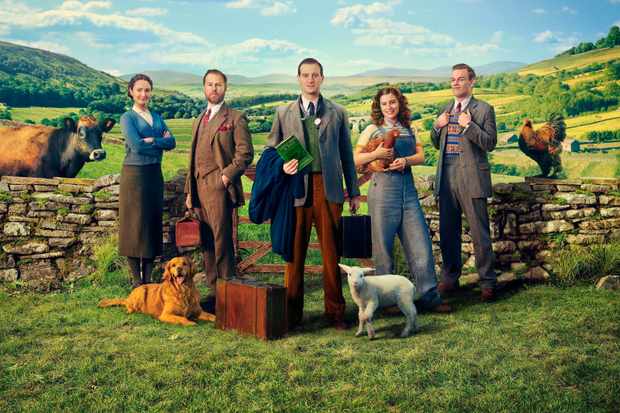 All Creatures Great and Small has been renewed for a second season. The first season of the reboot series aired on Channel 5 in the UK and will debut on PBS in the United States on Sunday, January 10th. Based on the memoirs of James Herriot, the story follows his life as a country vet in the 1930s. Nicholas Ralph stars as Herriot in the series.

Channel 5 Deputy Director of Programmes, Sebastian Cardwell, said the following about the renewal, per Radio Times:

“In challenging times, this new adaptation gained a special place in the heart of the British public. With values of community spirit, solidarity and heart-felt compassion, these stories are important ones for us to tell, now more than ever. I’m delighted that we will be seeing more of James and his Darrowby family when they return to our screens soon.”

James Herriot’s children, Jim Wight and Rosie Page, also spoke about the series and its renewal:

“We thought series one of the new All Creatures Great and Small was excellent. It was an immensely enjoyable adaptation of Dad’s books, very professionally acted and produced, and absolutely true to the ‘Herriot ethos.’ We have had wonderful feedback from many and various people, from all walks of life, telling us how they had derived great comfort from watching the new series in these stressful COVID times. We are very hopeful that series two will be equally uplifting and entertaining, and we are greatly looking forward to seeing it.”

All Creatures Great and Small had the highest ratings ever for a drama on Channel 5. The series will return to Yorkshire Dales in 2021 to film the second season.

Herriot’s books were the inspiration for a previous All Creatures Great and Small TV series which debuted in 1978. It ran for seven seasons and 90 episodes on BBC One and PBS.

What do you think? Are you a fan of the All Creatures Great and Small book? Will you watch this reboot series when it arrives on PBS in January?

Watching Season 1 of “All Creatures Great and Small” inspired me to read Herriot’s books. It is well acted,the scenery and costuming well done and the characters outstanding. Thank you for providing it for a second season!

I love this show, can’t get enough of it…Please don’t cancel.