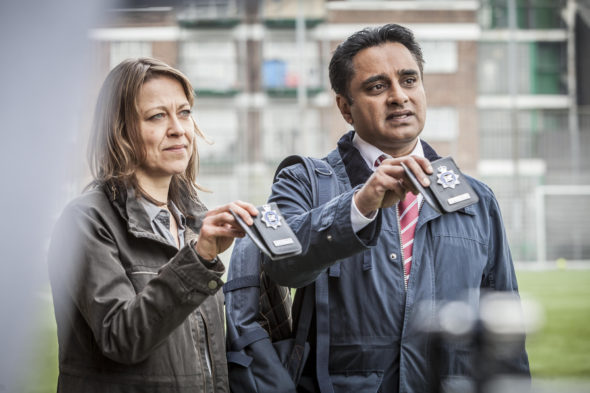 Have Stuart and Khan closed the books on their cold case files? Is the Unforgotten TV show cancelled or renewed for a second season on PBS? The television vulture is watching all the latest cancellation and renewal news, so this page is the place to track the status of Unforgotten, season two. Bookmark it, or subscribe for the latest updates. Remember, the television vulture is watching your shows. Are you?

A PBS British crime drama, Unforgotten stars Nicola Walker, Sanjeev Bhaskar, Trevor Eve, Bernard Hill, Ruth Sheen, Tom Courtenay, Gemma Jones, Brian Bovell, Cheri Lunghi, Hannah Gordon, Claire Goose, Tamzin Malleson, Peter Egan, and Frances Tomelty. The series follows DCI Cassie Stuart (Walker) and DS Sunil ‘Sunny’ Khan (Bhaskar), as they investigate historic cold cases. In season one, after the bones of a young man are found at the site of a demolished house, Stuart and Khan have a 39-year-old murder to crack. Their investigation will shake up the lives of four people who have been waiting for this moment for nearly four decades.

Because it’s supported by “Viewers like you,” rather than ads, ratings aren’t a useful measure when predicting whether PBS will cancel or renew Unforgotten for season two. However, since program has already been renewed for a third season on UK’s ITV, I believe the US will see a second season on PBS. Because that’s just speculation, I’ll keep an eye on the trades and update this page with breaking developments. Subscribe for free Unforgotten cancellation or renewal alerts.

What do you think? Do you hope the Unforgotten TV show will be renewed for a second season? How would you feel if PBS cancelled this TV series, instead?

I love this show!! Hopefully PBS will renew…. so looking forward to watching the new season!!!

On the schedule, season 2 is listed for April 29th, a week after the finale of season 1.