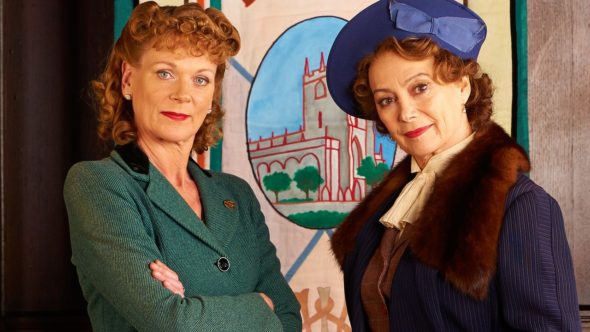 (Courtesy of © ITV Studios for MASTERPIECE)

Home Fires will continue but not on TV. According to The Bookseller, the cancelled ITV series will be continued as a set of books.

The UK drama, which aired on PBS in the U.S., followed the members of the Women’s Institute during World War II. The cast included Francesca Annis, Daisy Badger, Mark Bazeley, Leanne Best, and Samantha Bond. ITV cancelled the series last year after only two seasons.

Per The Bookseller, UK publishers Bonnier Zaffre have acquired the rights to three Home Fires novels. The books will pick up from the season two finale, and the first novel is slated for released as an e-book in July and as a paperback this fall.

The first of the three novels, Keep the Home Fires Burning, will pick up from the finale of the second series, aired 16th May 2016. It will publish as a four-part e-book serial with a part to be released each month from July 2017, and as a complete novel in paperback and e-book this autumn .Part one of the currently untitled second book publishes in e-book form in Spring 2018. “

What do you think? Are you a fan of Home Fires? Will you read the books?

I just finished season two and and now to find left hanging as to what happened. Such a well done series. It is very disappointing. I have trouble reading books so I will not be reading the final series completion. What a shame with such talented actors.

My husband and I watched the series for the second time with the same interest and enjoyment. We hope who ever made the decision and cancelled this well put together and acted series will review such a disappointing decision. The only success was to disappoint so many TV viewers. (6.10.2019)

I was really upset and surprised at the decision not to continue the series. The viewers were left wondering what happened when the plane struck the house. This series had wonderful actors and a good story to follow. Treating viewers this way has affected how I respond to the fund raising by PBS. I have continued to follow Simon Block and his book series.

My husband and I really liked the series and were sad there was only two seasons. I will however read the novel when it comes out.

I watched both seasons, but there is no way I can read the books. I live on a farm and I have no time whatsoever to hardly read it all. But I have enjoyed the hour in the evenings that I did have to watch the home fires on TV.

I find it difficult to believe that Home Fires is cancelled. It is one of the best British series that has been run and the acting is superb. Why would this be cancelled when shows that are inferior continue? In my opinion this was the wrong decision and many who watched are extremely disappointed. How disappointing!!!

Brilliant Story line . great acting …the final episode left us hanging with Questions. Big mistake not to continue as a Series…with so much nonsense on TV these days…a reminder of how normal people coped with life in WW2 ..gave us an insight of what was happening…

Let’s all sign up on this petition and let’s hope Netflix or Amazon revives Home Fire for it’s third season.
https://www.change.org/p/itv-itv-must-recommission-homefires

It was so disappointing that this show was cancelled, as the storyline with an unusual angle on the experience of Britons during WWII was both shocking and enlightening. I loved this show and have watched the entire drama originally and in re-run. Why?

I would probably read the books…eyesight not so great, however!

Infuriating! Why was such a terrific show cancelled? Somebody screwed up!

Shame on ITV for cancel such an excellent drama!!! I will miss those wonderful characters and wonderful story.

I concur that PBS is much too quick to pull the plug on beautiful shows like Mercy Street, Home Fires, and My Mother and Other Strangers. I too am rethinking whether to begin watching any shows at all, when so many end abruptly.

HOME FIRES
Is a wonderful series, I hope it will continue for many seasons.
PBS BBC
knows how to put on entertainment for the public

The choice of material they choose that takes place in the lives of so many persons past is important as well as : charming, heartfelt, endearing and a pleasure to watch.

My husband and I have been loving this series, and cannot believe it has been cancelled. Why??? It is superb. Please reconsider. There is so little great television these days, and this has been such a pleasure.

An awesome programme. Disappointed it is to be discontinued.
Would read the book.