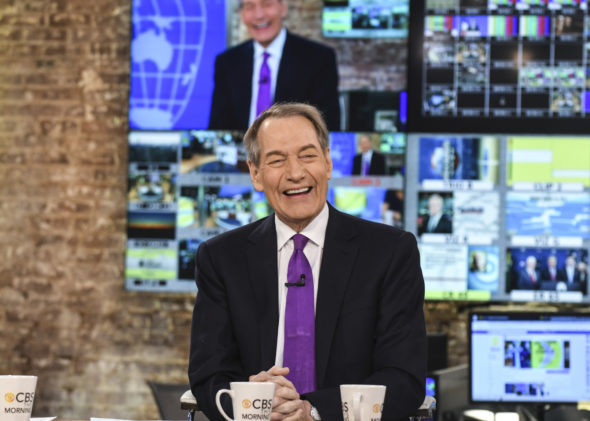 The Associated Press reports PBS has cancelled the Charlie Rose TV show. Similarly, CBS News has terminated Rose’s employment as a correspondent and CBS This Morning co-host. Rose’s CBS This Morning co-hosts — Gayle King and Norah O’Donnell — kicked off today’s edition of the CBS morning show addressing the situation, prior to the termination announcement. Watch their discussion, below.

Both the PBS cancellation and CBS firing come on the heels of a story The Washington Post published on Monday, in which eight women alleged the veteran journalist sexually harassed them. Three of those eight — Reah Bravo, Kyle Godfrey-Ryan, and Megan Creydt — levied their allegations on the record. Additionally, Rose’s executive producer, Yvette Vega said, “I should have stood up for them,” when the paper contacted her about the accusations.

A long-form interview talk show, Charlie Rose premiered in 1991 and has been syndicated by PBS since 1993. Rose has been a CBS This Morning co-host since January of 2012. He has also worked as a correspondent on the network’s premier news magazine show, 60 Minutes, as well as its cancelled spin-off, 60 Minutes II.

CBS New President David Rhodes addressed employees in a statement stressing that behavior of the type alleged of Rose is intolerable. Check it out:


"I’ve often heard that things used to be different. And no one may be able to correct the past. But what may once have been accepted should not ever have been acceptable," CBS News president David Rhodes says after company terminates Charlie Rose https://t.co/FT5YejPvKv pic.twitter.com/QoDmHOMMjL

Here are his full remarks via CBS (for those who cannot access social media from work):

A short time ago we terminated Charlie Rose’s employment with CBS News, effective immediately. This followed the revelation yesterday of extremely disturbing and intolerable behavior said to have revolved around his PBS program.

Despite Charlie’s important journalistic contribution to our news division, there is absolutely nothing more important, in this or any organization, than ensuring a safe, professional workplace-a supportive environment where people feel they can do their best work. We need to be such a place.

I’ve often heard that things used to be different. And no one may be able to correct the past. But what may once have been accepted should not ever have been acceptable.

CBS News has reported on extraordinary revelations at other media companies this year and last. Our credibility in that reporting requires credibility managing basic standards of behavior. That is why we have taken these actions.

Let’s please remember our obligations to each other as colleagues. We will have human resources support today and every day, and we are organizing more personal and direct training which you will hear about from senior management shortly.

I’m deeply disappointed and angry that people were victimized-and that even people not connected with these events could see their hard work undermined. If all of us commit to the best behavior and the best work – that is what we can be known for.

What do you think? Did you watch the Charlie Rose TV show? Will you still tune into CBS This Morning? Were you surprised by this turn of events? Sound off, in the comments.

Allegations of sexual misconduct are very troubling for several reasons. Our civilization has agreed for centuries that some behavior is criminal, shameful and sinful, but certain individuals do not take such things seriously if there are no consequences for that behavior or if it’s understood that some people are above the law and judgement or if some victims have been considered unworthy of protection. It’s also troubling to see large numbers of alleged victims coming forward, telling their stories in the media and just because of the nature of the accusations, the accused are being deprived of due process. We… Read more »

I think that CBS & PBS should have listened to the accusations and proven whether if he was innocent or guilty of the charges before dismissing him. I am not sticking up for Charlie Rose, but there are so many women accusing men of sexual harassment. But this cannot keep happening to women.

David Rhodes and others in the same kind of positions need to wake up to the concept of innocent until proven guilty because if not then they open themselves open to anybody looking to make a quick buck by making a false allegation, which, in the current climate of fire before knowing the truth might just come back to haunt them.