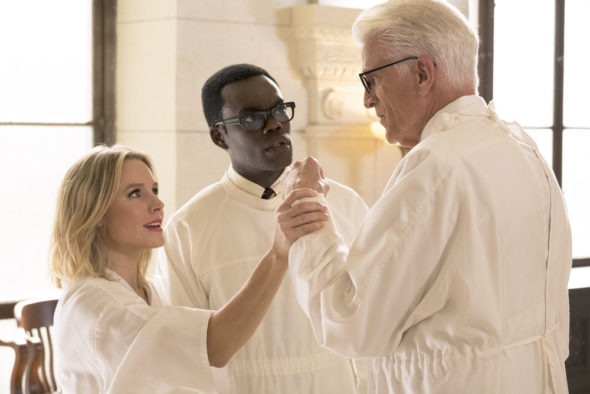 Fork yeah! NBC has renewed The Good Place TV show for a third season. Although the news is not yet up on the NBC-Universal press site, the show’s official Twitter page has announced the season three renewal.

An NBC sitcom, The Good Place stars Ted Danson, Kristen Bell, William Jackson Harper, Jameela Jamil, Manny Jacinto, and D’Arcy Carden. The story centers on the thoughtless Eleanor Shellstrop (Bell). After death, Eleanor mistakenly ends up in The Good Place — or does she? In season two, everything is up in the air, after the events of the first season’s “world-upending” finale.

The Good Place: A Look at the Ratings

The second season of The Good Place is averaging a 1.21 rating in the 18-49 demographic and 4.30 million viewers. Compared to season one, that’s down by 11% and down by 9%, respectively. At the time of the renewal, it was ranked fourth out of scripted NBC TV shows where demo performance is concerned and ninth, in terms of total audience size.

The Good Place Renewed for Season Three on NBC


Us, getting ready to tell you all that #TheGoodPlace has been renewed for Season 3: pic.twitter.com/apBLyvTLbL

What do you think? Are you a fan of The Good Place TV series? Did you expect it to be cancelled or renewed for season three? How many seasons do you think it has left?

this show can’t wait for season 3 to be back on Netflix as it’s the only way Australian”s can watch it . Kristen Bell is brilliant & so is the rest of the main cast does anyone know what date its coming back on Netflix by any chance ??

I love the show! The cast is terrific and I’m fond of everyone. Ted Danson, you always had a bit of an evil smile. Looking forward to season 3!

Thanks to all ‘powers that be’. I forking well love this show. It tickles the funnybone and I do enjoy watching Kristen Bell, and Ted Danson,in just about anything, however, to have them working together and playing off of each other is a bonus. Glad to see that someone has some sense in television world.