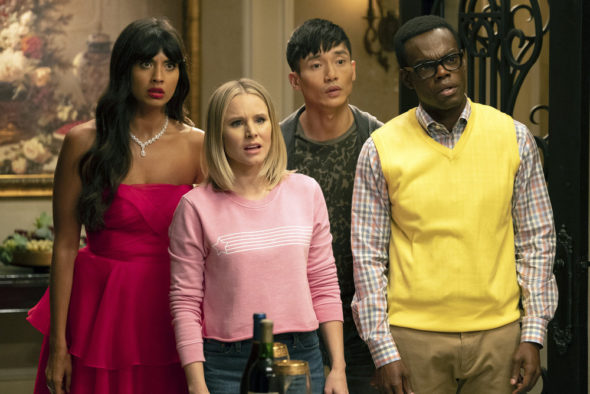 Why must all good things come to an end? Recently, The Good Place creator Michael Schur spoke with TVLine about the NBC TV show’s fourth and final season.

The comedy series centers on Eleanor Shellstrop (Kristen Bell) who, after dying, mistakenly ends up in The Good Place — instead of The Bad Place — where she truly belongs. The cast also includes Ted Danson, William Jackson Harper, Jameela Jamil, Manny Jacinto, and D’Arcy Carden.

Recently, Michael Schur announced season four will be the end for The Good Place. But why? Schur told TVLine he’s had the ending planned since the NBC series’ second season:

Yeah, we finished Season 1 and got picked up, and we’d already worked a little on Season 2 during Season 1. When we figured out that the big move at the end of Season 2 was that they were going to be sent back to Earth, which was pretty early in Season 2’s discussion, then it became even more evident. It was like, “Alright, if that’s Season 2, and Season 3 starts on Earth… and that suggests what Season 4 will be”… it just became clear that that was the end. There were a couple moments here and there where it was like, “Well, wait a second, maybe there’s this thing that could get us into Season 5.” There were a couple moments where it felt like, “You know what? Actually, if we hustled and we really crammed everything in, we could probably finish it in Season 3.” But pretty steadily, from the end of Season 1 and the very beginning of Season 2, it seemed like four years was the right number of years. We waited until we were absolutely, one hundred percent sure, and that happened at the end of last year.”

And what will happen in the final season? Schur revealed Chidi and Eleanor’s love story will continue:

That love story is a huge part of the final season, and it’s a huge part of the show in general, but we also have all these other gigantic issues that we’ve deliberately built the show around. So we try to balance it. Season 3 went a little more in that direction because it was the big unexplored thing that we hadn’t really gotten into, and Season 4 will swing away from it a little bit at first, because we have this other gigantic experiment thing going on. But it’ll be in the background, and then at times, it’ll come more to the front, and then it’ll fade back a little bit.”

The fourth and final season of The Good Place will debut on NBC this fall.

I just love The Good Place. Why do all good shows end too soon?

I am definitely going to miss watching the Good Place. Why the shows that get to be a favorite for all of us end up to be canceled!? Why?

Really disappointed. One of the few enjoyable shows on tv. It seems like they always cancel the good ones.

I almost wonder if Eleanor and Chidi ended up creating a child when hooking up in the actual good place? I mean, that could be the big reveal at the end of season 4, and BOOM! Netflix movie to finish it off!

Such a great cast & fun story lines. I’m sure it is hard to keep this concept going but we are so starved for non-“reality” or game shows that it is frustrating to lose a good, more expensive, scripted show. Is Kristen Bell’s returning to Veronica Mars a factor? Anyway, count me mad & sad.

Actually the real reason is that they want to end the show properly rather than getting caught off-guard in the game all networks enjoy playing: cancelling good shows to make way for more reality shows and NCIS spin-offs.