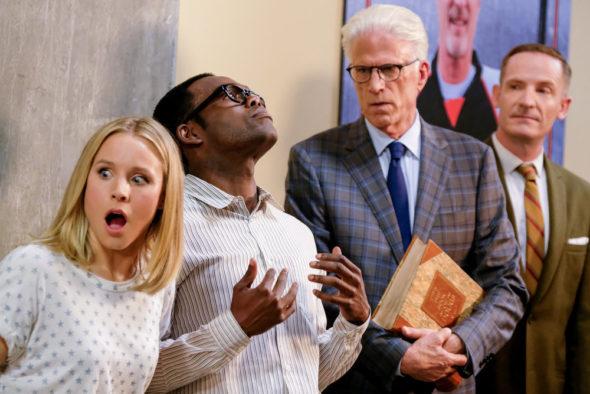 This is the bad place. Tonight at the Television Academy in North Hollywood, creator Michael Schur said The Good Place TV show would end with its upcoming fourth season. Schur sounded the death knell during a promotional panel for the show (for Emmy consideration). Season three of The Good Place completed its 13-episode run on January 24, 2019. The fourth and final season should premiere this fall (i.e. in the 2019-2020 television season). Schur and the creative team made the decision to end the comedy — and they have a final season to see it off, so although it is ending, let’s not call The Good Place cancelled..

An NBC sitcom, The Good Place stars Kristen Bell, Ted Danson, William Jackson Harper, Jameela Jamil, Manny Jacinto, and D’Arcy Carden. Kirby Howell-Baptiste recurs in season three. The series centers on Eleanor Shellstrop (Bell) who, after dying, believes she has mistakenly ended up in The Good Place — instead of The Bad Place — where she truly belongs. Along with fellow lost souls, indecisive philosopher Chidi Anagonye (Harper), shallow socialite Tahani Al-Jamil (Jamil), and blundering Blake Bortles super-fan, Jason Mendoza (Jacinto), Eleanor tries to find the good person within. In the third season, “Team Cockroach” was given a second shot a living a good life on earth, with ally and architect Michael (Danson) and not-a-robot Janet (Carden) trying to help them out. 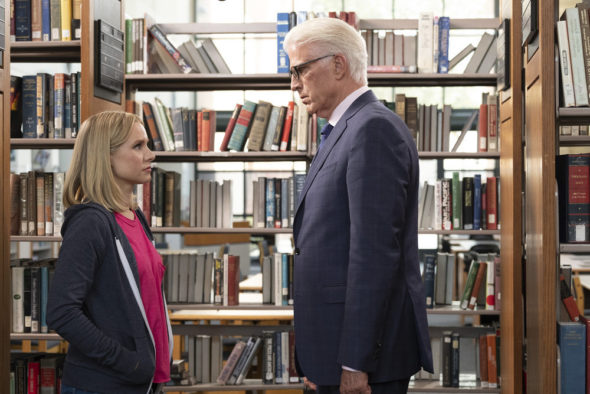 Check out this NBC Media Alert on the decision to end The Good Place TV series with season four.

What do you think? Are you a fan of The Good Place TV series? Is season four the right time to end this NBC TV show? If it were up to you, would The Good Place be cancelled or renewed for season five?

It’s a great show…. I binge watch it on Netflix. I don’t watch it week to week… I had never heard of it until I found on Netflix. I don’t watch sitcoms OR network television — maybe that’s part of the problem with this show finding the right audience. I feel like it would have done much better as a Netflix original than a traditional network show.

I gave up on television shows a few years ago until I watched this. It is so creative and entertaining. I love the subject matter. I hate to see the show end.

I love The Good Place and will miss it.

I will miss this show it needs to be picked up again .The show is so easy to watch and is not over the top as a lot of shows are .

My heart is broken!!! This show is amazing all the way around. The writing and acting deserve an A PLUS!! The chemistry between the characters is so strong that it is easy to fall into the stories. I will miss the show but given how well it has been created I trust the creative minds behind it to end it where it should so not to lose and fans. Thank NBC for giving this a shot and not giving up after the first season. I will definitely miss it. I also waited to stream a few episodes at a time… Read more »

This is Grade A television. And even though the fanboy in me will miss seeing the creative genius that is THE GOOD PLACE and the characters that have inhabited its space, I fully trust the creators of the show that if ending it after four seasons is the right time, then I can’t argue that decision. I’m ready for one fork of a ride when season four sirs this fall.

I think it’s a very well written, well acted, fun different show. I’m sad it’s finishing up, but glad that they have a chance to wrap it up for us.

The show has run out of steam. Not funny or fun anymore. As soon as it was discovered that they were in the bad place, I started to lose interest.

I liked the first season but now it feels like the show is trying too hard. Before the revelation that they were in the Bad place, I found the show entertaining but now it just stumbles along. I thought that it would get cancelled by now.

Now she will have more time for Veronica Mars

I tried to watch it but it just didn’t grow on me. So it doesn’t matter if they cancel it or not.

Please renew the Good Place! This show makes me laugh so much and I get so much joy from them.