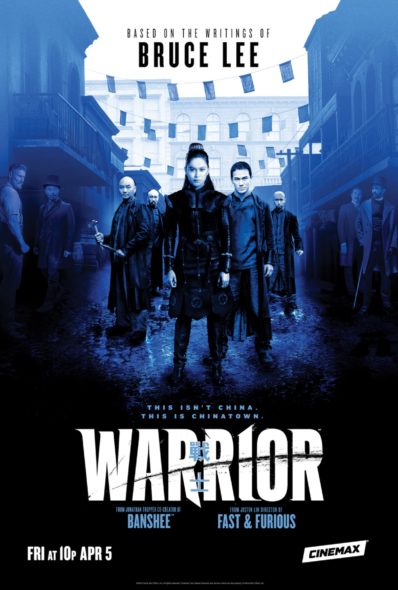 How goes Ah Sahm’s fight during the first season of the Warrior TV show on Cinemax? As we all know, the Nielsen ratings typically play a big role in determining whether a TV show like Warrior is cancelled or renewed for season two. Unfortunately, most of us do not live in Nielsen households. Because many viewers feel frustration when their viewing habits and opinions aren’t considered, we’d like to offer you the chance to rate all of the Warrior season one episodes here. *Status update below.

A Cinemax action drama, Warrior stars Andrew Koji, Kieran Bew, Olivia Cheng, Dianne Doan, Dean Jagger, Langley Kirkwood, Hoon Lee, Christian McKay, Joe Taslim, Jason Tobin, Joanna Vanderham, Tom Weston-Jones, and Perry Yung. The series follows Chinese immigrant Ah Sahm (Koji), who arrives in San Francisco in 1878, during the Tong Wars, looking for his sister, Mai Ling (Doan). As a gifted fighter, it is not long before one of the local organized crime factions, known as a tong, recruits Ah Sahm to be their hatchet man. The story also centers on the racial tensions of the time between Chinese and Irish immigrants.

What do you think? Which season one episodes of the Warrior TV series do you rate as wonderful, terrible, or somewhere between? Should Cinemax cancel or renew Warrior for a second season? Don’t forget to vote, and share your thoughts, below.

*4/24/19 update: The Warrior TV show has been renewed for a second season on Cinemax.

Multi dimensional characters with emotional ties that you can feel inside. Very well written and portrayed perfectly by all of the performers. Bruce Lee would be proud, perfect timing, this series is desperately needed now. Can’t wait for season 2, please start planning season 3!

I really like the Warrior so far but was disappointed at the end when Ah sahm lost. That part wasnt so bad, but I rhink it would have been awesome if Ah Sahm went away to train harder and maybe find another master to get better before rejoining the Hop Wei.

I think they missed a great chance here and was hoping Ah Sahm would learn and get better, because atm, hes just the same old same old.

Please bring back the warrior, I enjoy the series and look forward to seeing it on cinamax.. This is the only reason I have cinamax… Bring it back.. Please