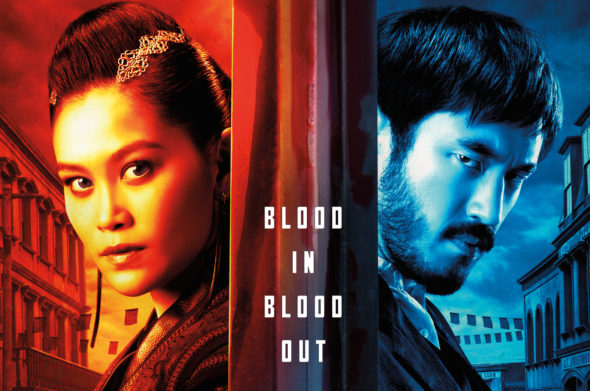 Earlier this year, it was revealed that Cinemax wouldn’t be ordering original shows in the future. Asa result, the Warrior series may already be considered to be cancelled at the cable channel. Unless another outlet rescues it and orders a third season, it appears that season two will be the end, regardless of its ratings. Could Warrior still survive? Stay tuned. *Status Update Below.

An action crime drama, Warrior stars Andrew Koji, Kieran Bew, Celine Buckens, Olivia Cheng, Dianne Doan, Dean Jagger, Langley Kirkwood, Hoon Lee, Christian McKay, Dustin Nguyen, Joe Taslim, Chen Tang, Jason Tobin, Miranda Raison, Joanna Vanderham, Tom Weston-Jones, and Perry Yung. The series follows Chinese immigrant Ah Sahm (Koji), who arrives in San Francisco in 1878, during the Tong Wars, to look for his sister, Mai Ling (Doan). As a gifted fighter, it’s not long before one of the most powerful organized crime families (known as a tong) in Chinatown recruits Ah Sahm to be its hatchet man. Season two follows rival Chinatown tongs, the Hop Wei and the Long Zii, as they fight for dominance amidst the growing anti-Chinese racism that threatens to destroy them all. After barely surviving last season’s disastrous showdown, Ah Sahm is back with the Hop Wei and determined to wreak vengeance on Long Zii’s new leader. The series is based on the writings of martial arts legend Bruce Lee.

What do you think? Do you like the Warrior TV series on Cinemax? Should it be cancelled or renewed for a third season, possibly on another channel?

The warrior is the best seasonal movie I have watched this year,I really hope there will be a season 3.

Warrior is one of the best shows I have seen in a while, I for one am very disappointed that it will not continue, I would look forward from Saturday for the next episode I really hope it finds a way to stay on I and my friends would definitely keep watching.

Great to see Bruce Lee’s writings performed on film. Also good to see a production with Asian Cast. Should be marketed more on Instagram to reach Asian audience. The script in season two developed the characters much better than than season one. It would be great to see Season 3.

Please we want more! Season 3, 4, 5
Why are they cancelling this?
Racist?

Just discovered this show at season 2..what a great show. Great fight scenes and incredible acting but alas every time i find a gem like this they cancel it.

Hope they or another company makes season three. Such a great series and great cast too. Would be criminal not to see it through to the end.

Hope there is a season three. Great series, great cast. Be such a shame not to see it through to the end.

So this means no new series on Cinemax? Just lame see it once, and never watch again movies, which I’ve already seen from Redbox.
What a shame as Strike Back was a great show, and was hoping now that Blindspot is done that Stapleton, and Winchester would come back.
Never got into Banshee, Rellik, or C.B. Strike. I did somewhat like Outcast, would’ve liked another season of that.
Just shut down Cinemax with this kind of effort.

Hope there is Season 3, love the show

I really want to watch this but first wait for viewers cause don’t want to see it canceled and unfinished.