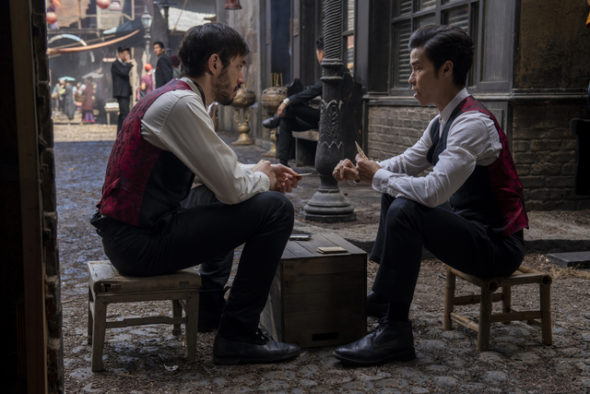 The Cinemax series that’s based on the writings of martial arts legend Bruce Lee will continue.  The Warrior TV show has been continued for a third season but is moving to the HBO Max streaming service.

Airing on Friday nights on Cinemax, the second season of Warrior averaged a 0.01 rating in the 18-49 demographic and 70,000 viewers. Compared to season one, that’s down by 63% in the demo and down by 47% in viewership. Season two finished airing in December.

With low ratings and the fact that Cinemax has gotten out of the original series business, it seemed likely that Warrior would be cancelled. Today, it was announced that the show had been renewed for year three on HBO Max — where viewers can also see the first two seasons. A premiere date for season three has not been revealed yet.

The drama series WARRIOR will come to HBO Max for its third season, it was announced today by Casey Bloys, Chief Content Officer, HBO and HBO Max.

Logline: A gritty, action-packed crime drama set during the brutal Tong Wars of San Francisco’s Chinatown in the late 19th century, and based on the writings of martial arts legend Bruce Lee, the first two seasons, which premiered on Cinemax, are now streaming on HBO Max via HBO platforms.

Casey Bloys, Chief Content Officer, HBO and HBO Max quote: “’WARRIOR’ introduced viewers to a distinct world from the past, executed with dynamic action and relevant storytelling, with a brilliant cast led by Andrew Koji. We can’t wait to see what Jonathan, Justin and Shannon will bring to the next chapter of this series on HBO Max.”

Shannon Lee, Executive Producer, Bruce Lee Entertainment quote: “Justin, Jonathan, and I were thrilled when Warrior was put on HBO platforms to be discovered by a whole new legion of fans. Now we are excited and grateful for the opportunity to do another season, and we applaud HBO Max for understanding the importance of telling this story and for continuing to support this level of representation in our industry. I just know that my father is grinning right now to see this show he dreamed of so long ago continuing to beat the odds. We have every intention of delivering the same high level of meaningful storytelling and Gung Fu action in season 3!”

The series returned for its ten-episode second season October 2, 2020 on Cinemax. Hailed as “the most underrated action series of the century” by Inverse, Vanity Fair called it a “handsome, adrenalized ride” that “breathes vivid life into aspects of America’s past,” and The Ringer highlighted it as a “supremely kick-ass” series with “impressively choreographed fight sequences.”

What do you think? Have you seen the Warrior TV series? Are you looking forward to seeing season three on HBO Max?

I must admit, I loved the first season, watched it over and over again, but by the time I was done watching the second season, I had lost all interest. The plot had fizzled to random directions. It ended with no clear direction at all.

I’ll watch the third season, but the writers better make it exciting again quickly, or it will die fast.

I love this show and can’t wait for season 3 to be released.

I came across this show last summer and it is terrific. You can see the first two seasons on Crave.