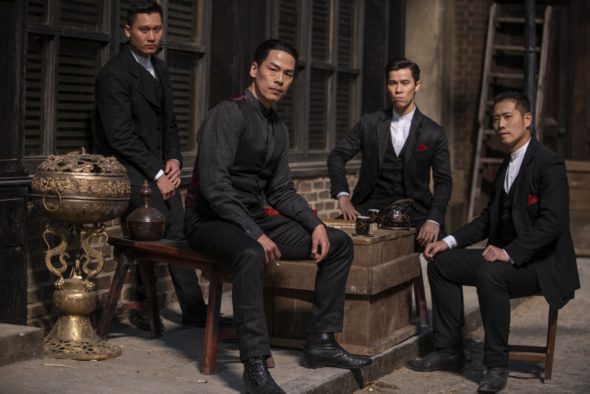 Will Ah Sahm live to fight another day? Has the Warrior TV show been cancelled or renewed for a second season on Cinemax? The television vulture is watching all the latest cancellation and renewal news, so this page is the place to track the status of Warrior, season two. Bookmark it, or subscribe for the latest updates. Remember, the television vulture is watching your shows. Are you?

A Cinemax action drama, Warrior stars Andrew Koji, Kieran Bew, Olivia Cheng, Dianne Doan, Dean Jagger, Langley Kirkwood, Hoon Lee, Christian McKay, Joe Taslim, Jason Tobin, Joanna Vanderham, Tom Weston-Jones, and Perry Yung. The series follows Chinese immigrant Ah Sahm (Koji), who arrives in San Francisco in 1878, during the Tong Wars, to look for his sister, Mai Ling (Doan). As a gifted fighter, it is not long before one of the local organized crime factions, known as a tong, recruits Ah Sahm to be its hatchet man. The story also centers on the racial tensions of the time between Chinese and Irish immigrants, and their dealings with the cops and politicos.

The first season of Warrior averaged a 0.03 rating in the 18-49 demographic and 133,000 viewers. Learn how Warrior stacks up against the other Cinemax TV shows.

Will Cinemax cancel or renew Warrior for season two? The ratings have been very low so I’m leaning toward a cancellation but it’s hard to tell with Cinemax. They’ve renewed some very low-rated series. I’ll
update this page with breaking developments. Subscribe for free Warrior cancellation or renewal alerts.

4/24/19 update: The Warrior TV show has been renewed for a second season on Cinemax.

What do you think? Are you glad that the Warrior TV show has been renewed for a second season? How would you feel if Cinemax had cancelled this TV series, instead?

Warrior is exhilarating….I’m an avid Bruce Lee and martial arts fan…I’m very happy there will be a season two…can’t wait!!!!

My family and I really looked forward to watching this show. It is the best series we’ve seen this year. I would hope that Cinemax would advertise this series a lot better. There are many Bruce Lee fans out there, if they knew this Series was a Bruce Lee idea you’d have more subscribers. Imagine if Warner Brothers would have put Bruce Lee in the “Kung Fu” series instead of David Carridine, it would still be running in prime time.