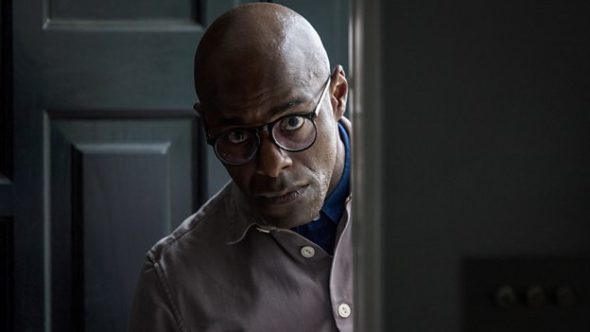 Is the DCI Markham’s nightmare over? Has the Rellik TV show been cancelled or renewed for a second season on Cinemax? The television vulture is watching all the latest cancellation and renewal news, so this page is the place to track the status of Rellik, season two. Bookmark it, or subscribe for the latest updates. Remember, the television vulture is watching your shows. Are you?

A British crime drama on the Cinemax premium channel, Rellik stars Richard Dormer, Jodi Balfour, Paterson Joseph, Paul Rhys, Lærke Winther, Shannon Tarbet, Ray Stevenson, Michael Shaeffer, Rosalind Eleazar, and Georgina Rich. It recounts the hunt for a serial killer, but the story is told in reverse (nb. the title is the word killer, backwards). The series centers on DCI Gabriel Markham (Dormer). A dogged detective, Gabriel is determined to track down the serial killer who scarred him with an acid attack. As the case weighs on him, his wife, Lisa (Winther), is keeping a secret which could destroy their marriage. Meanwhile, Gabriel grows close to DI Elaine Shephard (Balfour), who seems ready to do anything for him.

The first season of Rellik averaged a 0.01 rating in the 18-49 demographic and 63,000 viewers. Learn how Rellik stacks up against the other Cinemax TV shows.

Will Cinemax cancel or renew Rellik for season two? The first season originally aired on BBC One in the UK, and the series is a co-production between the British network and Cinemax. After the first couple of weeks, its British ratings really dropped, so if this show has any chance at all, it will be thanks to the US audience. With these awful numbers, I don’t see it getting a second season. I’ll update this page with breaking developments. Subscribe for free Rellik cancellation or renewal alerts.

What do you think? Do you hope the Rellik TV show will be renewed for a season two? How would you feel if Cinemax cancelled this TV series, instead?

Just saw it here in Perth Western Australia and definitely agree with the other comments…my daughter and I had 2nd thoughts after the first 2 episodes BUT became more comfortable with the backwards storytelling, so we’re glad we persisted! As another comment said tho, it’d be far better told beginning to end. I hope the format of the 1st one doesn’t put too many people off because it’d be a shame…there’s so much more to tell…the creepy stepfather scenario for one…

I would definitely like for it be reviewed. There could be both new cases for DCI Markham, as well as follow-up on the events of season one. There’s the matter of the Barker murder. Will Markham figure out Mrs. Barker’s murder was not part of the series? Will he figure out who is responsible for that one. This was clearly left as a loose thread that could be pulled on a second season. I hope the BBC and/or Cinemax renew the show to tease out that and new or related events. It is a high-quality show, and the backwards story… Read more »

This production would actually comprise a relatively good if not brilliant Series if it were simply Killer as opposed to Rellik and it were played out as a plot line in real time, forgetting the gimmicky, silly, flashback bruhaha. I kept waiting for something….anything about the flashback or “back-to-front” nature of the time-line production in the series to wow me and it never came. Instead, I kept thanking myself that I recorded and binged the show as, on several occasions, I had to go back and catch up and determine what the hell was going on. C’mon guys….let’s just take… Read more »

The first 2 episodes were a little difficult to follow through all the time shifts, but it’s darker and edgier than other shows; so it stuck with it. Once all of those warped threads meshed together it was awesome and the finale blew me away.