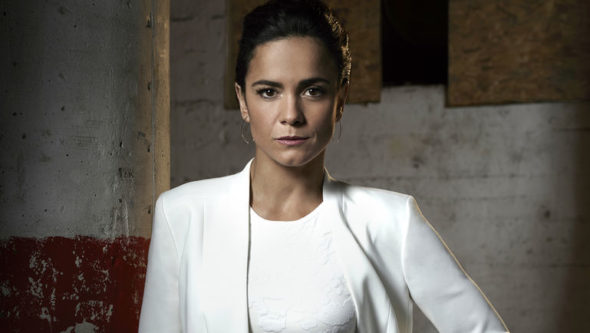 The reign continues for Queen of the South. Today, USA Network announced they’ve renewed the TV show for a fourth season.

Season three of Queen of the South just wrapped in mid-September with decent ratings. Over the course of 13 episodes, the season earned an average rating of .37 in the 18-49 demo with 1.132 million viewers.

Read more about the season four renewal from USA Network below:

UNIVERSAL CITY, CA – October 1, 2018 – USA Network today announced a fourth season renewal for the hit drama QUEEN OF THE SOUTH. Starring Alice Braga (“I Am Legend”), the series is based on the literary page-turner “La Reina Del Sur” by internationally acclaimed author Arturo Pérez-Reverte. Season 4 is set to return in 2019.

A co-production from Fox 21 Television Studios and Universal Cable Productions (UCP), QUEEN OF THE SOUTH is the #1 ad supported cable scripted series on Thursday nights at 9pm among key demos P18-49, P25-54, P2+, M18-49 and F18-49 year to date, and has delivered an average of 2.1MM total viewers P2+ this season.

QUEEN OF THE SOUTH tells the powerful story of Teresa Mendoza (Braga), a woman who is forced to run from the Mexican cartel and seek refuge in America. In Season 3, Teresa strikes out on her own, determined to build a new empire for herself. But as enemies old and new close in, she realizes that being Queen will require more work — and more sacrifice — than she ever imagined. Executive produced by David T. Friendly and Natalie Chaidez, the drama’s third season aired its finale on September 13.”

What do you think? Do you watch Queen of the South? Are you glad it’s been renewed?

Damn right! It’s about time we had a very cool hard ass female lead in a series.
It is also very reality based with excellent characters and story lines. I tell everyone about it! !! Give me more of Teresa.

I love love Queen of the South. I’m thrilled it’s being renewed for Season 4. Can’t wait!

I love queen of the south. I actually was on the run and wouldn’t turn myself in bc I was going to miss the third season. However when I realized it came on Saturday mornings I did what had to be done and turned myself in. I didn’t get to finish the third season so can it hurry and be put on Netflix? I love the show. She’s an amazing actress sexy. It’s a great show I need it on Netflix

is james in seson 4? hes my favorite

Love this show!! So glad there is a 4th season hopefully coming out soon!

I like the show. I’m not a fan of violent drug movies but Teresa Mendoza is a kick azz woman.

Yes. Please renew. One of my favourite shows. Have watched all episodes. Looking forward to more. Awesome show!!!

Yes season 4 best tv show on USA. Please have the show soon. Please bring James in the season 4 too.

Love this show – happy it has been renewed. Very entertaining.

LOVE IT. Love everybody in it. I especially love James!❤️

Ecstatic that the Queen has been renewed. Best series on tv right now. Hope it reigns for many years to come.

I’m very excited that Queen of the South is renewed. I think it’s one of the best shows on TV.