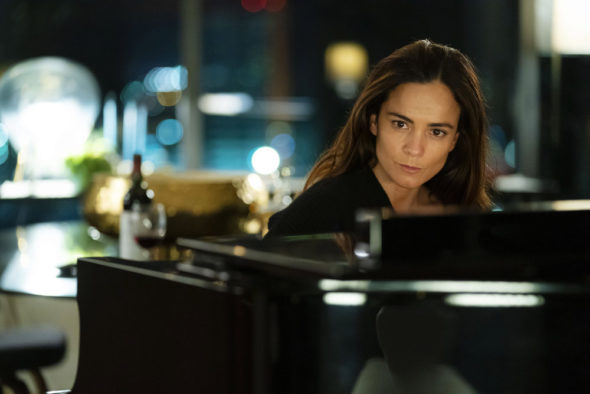 What do you think of Teresa’s reign during the fourth Queen of the South TV show on USA Network? As we all know, the Nielsen ratings typically play a big role in determining whether a TV show like Queen of the South is cancelled or renewed for season five. Unfortunately, most of us do not live in Nielsen households. Because many viewers feel frustration when their viewing habits and opinions aren’t considered, we’d like to offer you the chance to rate all of the Queen of the South season four episodes here. *Status update below.

A USA Network drama, based on the Spanish-language telenovela and novel La Reina Del Sur, by Arturo Pérez-Reverte, Queen of the South stars Alice Braga as Teresa Mendoza, a woman on the run from a powerful drug cartel, who seeks refuge in the U.S. The cast also includes Veronica Falcón, Hemky Madera, Peter Gadiot, Jon-Michael Ecker, Idalia Valles, and Nick Sagar. Chris Greene and Sofia Lama recur in season four, when Teresa expands to New Orleans.

What do you think? Which season four episodes of the Queen of the South TV series do you rate as wonderful, terrible, or somewhere between? Should USA Network cancel or renew Queen of the South for a fifth season? Don’t forget to vote, and share your thoughts, below.

*Update: USA Network has renewed the Queen of the South TV show for a fifth and final season.

My wife & I just binge-watched Season 4 after watching Seasons 1 – 3. The show is AMAZING, with terrific acting and production values (cinematography, sound, music). This is my absolute favorite show on TV!

Love This Show, Just Found It And Heard About It On Netflix, Also Learned It’s On USA,

Queen of the South is my absolute favorite show. I hope it will continue for many many seasons. I can see much growth for the show. I love and look forward to watching each week and buy the DVD as soon as it comes out. I can hardly wait for the new season to begin. Way to go Teresa let’s take over the country!!

I will be very disappointed if this show is ever cancelled! I cant get enough of it. They need to have more episodes.

Queen of the South is an amazing show the story line is epic. The actors are very well suited for their roll. This show truly brings out all of my emotions it’s a very refreshing twist on the cartel most shows of the same caliber have men in power instead of women. I honestly love this show and will be upset if it’s cancelled as will most of my girlfriends.

Love the show. My husband and I are 67 and 70. Would love to see the elder queen of the south return ms Braga. I love her acting.

I agree that James should be brought back. I love the chemistry between him and Theresa. I also feel USA has never advertised the show like it should to attract viewers. The cast is great, and USA will be making a mistake by not bringing it back for Season 5 and by not tying up all the loose ends with many of the former characters. This is my last series with USA unless they try to do better with a really excellent show.

This season has been terrible. They put it on too late for people on the East Coast, and it is somewhat like a Soap Opera. I was paying for the Amazon episodes, but no more. The amount of people watching has dropped off (Nielson ratings), and I’m not surprised A few good episodes, but for the most part, it’s not action packed enough.

I agree that the loss of James is killing this show. I hope he comes back before it dies completely, because other than that, I LOVE QOTS!

The more episodes I see without James, the more disappointed I am in this show. Relationships are everything, and there was a lot more the writers could have done with James’ and Teresa’s. You don’t happen upon someone who would “die for you” every place you go. I love Pote but that’s not a romance, and the chemistry between Teresa and the new man in her life is non-existent. You need to find a way to bring James back to Theresa and keep him there. Then, it’s Ratings ⬆️!

I absolutely love queen of South is so dramatic and you just can’t take your eyes off of it and you can’t wait to see what happens next. I miss James but I like the new guy cuz he does keep it interesting but James should come back where is he at.? Please renew seasons 5 6 7 8 9 and 10 and so on

I agree – this show is amazing, but…
We need Peter Gadiot (James) back with Teresa Mendoza. The chemistry with the new guy is not there. With Peter it was easy like breathing air when you watch the episodes. New Orleans is not as exotic (you’re not showing the exotic part of it) in this season. This is a season it seems to try to find normal, but without James nothing is normal – he added that level of steady and with Alice Braga and Hemky Medera.

This comment is for the writers, whatever it takes to bring James back please make that happen. I love Teresa and the rest of the cast but without James the show seems to be losing your fans interest. The story line is great but bring James back for Teresa!