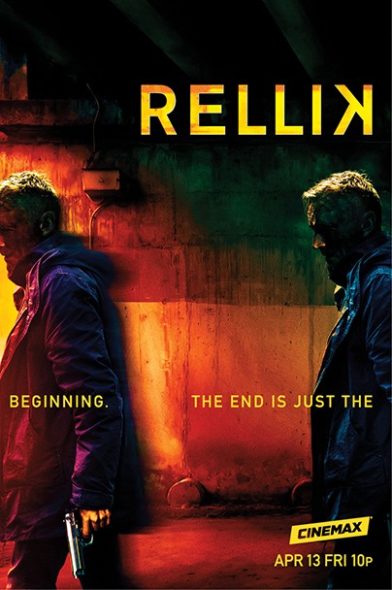 The end is just the beginning, or so says the official trailer for the new Rellik TV show. Check it out, below. The series is a co-production with BBC One and debuted in UK last fall. In the US, Rellik, season one, will premiere on Cinemax on Friday, April 13, 2018 at 10:00pm ET/PT.

A six-part thriller told in reverse, Rellik stars Richard Dormer as Gabriel Markham, a UK detective on the hunt for the serial killer who disfigured him with an acid attack. The Cinemax TV series also stars Jodi Balfour, Patterson Joseph, Ray Stevenson, and Paul Rhys.

Learn more and check out the Rellik season one episode descriptions, from this Cinemax press release.

What are the experiences that forge the people we become?

Unlike most murder mysteries, RELLIK turns the familiar serial murderer story on its head and begins with the apprehension and death of the presumed killer. Over six hour-long episodes, Gabriel and his team’s pursuit of the suspected murderer reveals the causes of the characters’ actions, as well as the events that push them to the brink.

RELLIK also stars Jodi Balfour (CINEMAX’s “Quarry”; “The Crown”) as Elaine, newly transferred to the team, who shares a special relationship with Gabriel. In addition, the show features: Patterson Joseph (HBO’s “The Leftovers”) as Isaac, a suspicious psychiatrist who may be hiding darker depths to his own psyche; Ray Stevenson (HBO’s “Rome”) as Benton, a bullish police chief with his own secrets; and Paul Rhys (“Victoria”) as Patrick, a two-faced businessman with a deeply troubling family life.

In their hunt for a serial killer, detective Gabriel Markham and his team come to the apparent end of the case, but how did it all begin?

Gabriel comes face to face with the prime suspect in the serial murders as events begin to spiral out of control.

After another body is discovered, Gabriel is pulled away from the case by a family crisis.

With pressure mounting on all sides, the killer’s sights turn towards Gabriel.

As another suspect enters the frame, Gabriel’s investigation gets a helping hand.

Written by Harry and Jack Williams; directed by Hans Herbots.

The hunt is on for the killer as the truth is finally pieced together.

What do you think? Do you plan to check out the Rellik TV series premiere on Cinemax? Let us know, below.