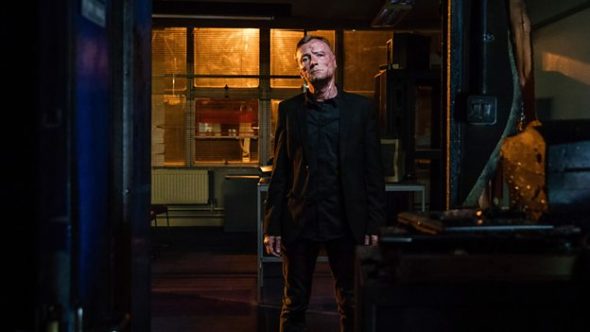 What do you think of DCI Markham’s investigation, during the first season of the Rellik TV show on Cinemax? As we all know, the Nielsen ratings typically play a big role in determining whether a TV show like Rellik is cancelled or renewed for season two. Unfortunately, most of us do not live in Nielsen households. Because many viewers feel frustration when their viewing habits and opinions aren’t considered, we’d like to offer you the chance to rate all of the Rellik season one episodes here.

A Cinemax co-production with BBC One, Rellik stars Richard Dormer, Jodi Balfour, Paterson Joseph, Paul Rhys, Lærke Winther, Shannon Tarbet, Ray Stevenson, Michael Shaeffer, Rosalind Eleazar, and Georgina Rich. The British crime drama recounts the hunt for a serial killer, but the story is told in reverse (nb. the title is the word killer, backwards). It centers on DCI Gabriel Markham (Dormer). A dogged detective, Gabriel is determined to track down the serial killer who scarred him with an acid attack. As the case weighs on him, his wife, Lisa (Winther), is keeping a secret which could destroy their marriage. Meanwhile, Gabriel grows close to DI Elaine Shephard (Balfour), who seems ready to do anything for him.

What do you think? Which season one episodes of the Rellik TV series do you rate as wonderful, terrible, or somewhere between? Should Cinemax cancel or renew Rellik for a second season? Don’t forget to vote, and share your thoughts, below.