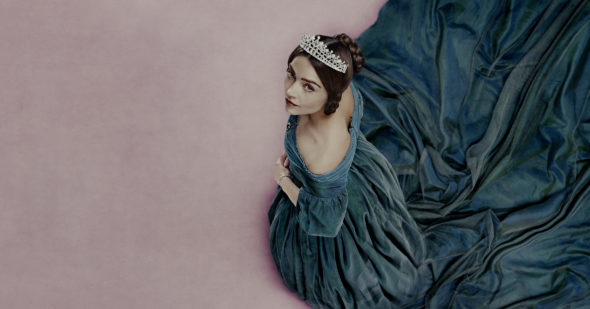 TV show description:
A historical drama from creator Daisy Goodwin, the Victoria TV show centers on Queen Victoria (Coleman). The series kicks in 1837, as the 18 year-old ascends to the British throne.

At the outset of her reign, Victoria grows close to her first Prime Minister, Lord Melbourne (Sewell). Meanwhile, she must deal with the machinations of her mother, the Duchess of Kent (Flemming), and her advisor, Conroy (Rhys).

In order to separate herself from her mother and Conroy’s influence, the young monarch realizes she must marry. She soon begins a considered courtship with her first cousin, Prince Albert (Hughes), who will go on to become her husband and the father of her nine children.

The series examines the life of one of Britain’s most iconic queens, who would would reign for 63 years, as the entire world changed. Through scandal, love, loss, tragedy, and triumph, Victoria endures.

What do you think? Do you like the Victoria TV series? Should this TV show be cancelled or renewed for another season on PBS?

it is a great series and hope it carries on

I just love this show and can’t wait for Monday nights at 9 pm. Just started watching not that long ago and so look forward to watching for a few years to come. We should at least be able to watch until Queen Victoria’s death and funeral! Just love this show and it is in the top three of my weekly favourites! PLEASE renew!

one of my favorite shows.5 stars for me.

I love the show and it should continue.

Also looking forward to SEASON 4 ! Is it going to happen?

So want to see more of Victoria. When will there be a season 4?

I loved the series Victoria, am so disappointed that it has not been renewed for another season… I think it was a great history on Queen Victoria and should be brought back.

I am so wrapped up in Victoria please continue this show! One of my favorite shows besides Downton Abbey and now that they have cancelled that show I have become totally Intrigued with Victoria another great show with awesome actors!! When your stuck at home with waiting patiently for a show to continue and your in limbo due to Coronavirus you depend on good shows to get you through these times! Can’t wait for season 4! Thanks PBS for always bringing the best shows to public broadcasting!!! Hope you continue to be there for your viewers, fans and contributors!

I have been anxiously waiting for season 4. Please keep this show on for more seasons. I have learned so much from this show and love period pieces.

It should be renewed for several more seasons! The costumes are beautiful and so are the settings. Love it!

It should definitely be renewed. It is an excellent series, the acting, the directing, the costumes, the settings, the history. Please don’t cancel this like you have other series that I was enjoying. I’m becoming disappointed with some decisions made by PBS.

This program should definitely be renewed. Selfishly, I like historical programs. This however provides rich acting, stunning scenery, and a glimpse of history.

Love this show. I hope it runs until it covers her whole life

I’ve waited so long for season 4. PLEASE don’t disappoint us.