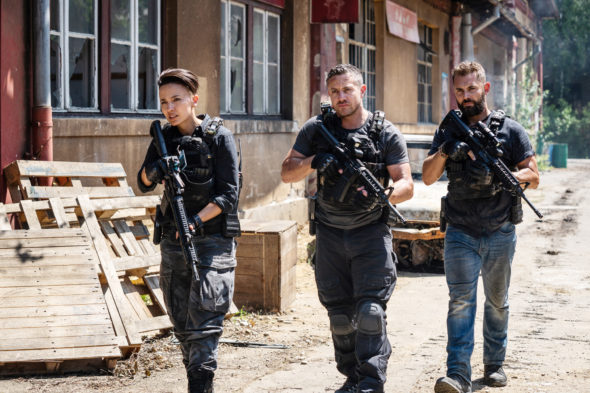 Can this truly be the final season? Has the Strike Back TV show been cancelled? Renewed for a ninth season on Cinemax? The television vulture is watching all the latest cancellation and renewal news, so this page is the place to track the status of Strike Back, season nine. Bookmark it, or subscribe for the latest updates. Remember, the television vulture is watching your shows. Are you?

The eighth season of Strike Back averaged a 0.01 rating in the 18-49 demographic and 75,000  viewers. Compared to season seven, that’s down by 43% in the demo and down by 30% in viewership. Find out how Strike Back stacks up against other Cinemax TV shows.

We already know that Strike Back is ending but, could there be a ninth season anyway? The show ended in 2014 after five seasons but was revived a couple of years later. Could that happen again? I doubt the show will be back soon but I believe that Strike Back will return once again someday. I’ll update this page with breaking developments. Subscribe for free alerts on Strike Back cancellation or renewal news.

What do you think? Do you hope the Strike Back TV show will be revived for a ninth season someday? Should Cinemax bring this TV series back?

I really hope they renew the series. I have all the DVD and have watched them several times. Actually about time to watch them again. Please bring the series back. Scott and Stonebridge are the best.

Absolutely, I like the idea of a team retiring and a new team assembling.

I hope so I have watched all the strike back series