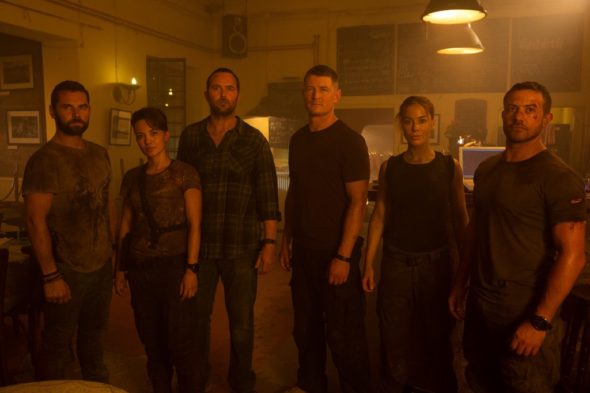 Some familiar faces are returning to Strike Back. This week, Cinemax announced Sullivan Stapleton and Philip Winchester will guest on the TV series’ sixth season.

For season six, Stapleton and Winchester will reprise their original Strike Back roles as Sgt. Damien Scott and Sgt. Michael Stonebridge, respectively. They will guest in two episodes of the Cinemax series, beginning on March 30th at 10 p.m. ET/PT and concluding with the season six finale on April 6th at 10 p.m. ET/PT.

Note: This is considered the sixth season in the UK where the series originates. Cinemax picked up the show starting with season two in 2011. Then, in 2013, they went back and aired the first season of six episodes as a special mini-series called Origins.

What do you think? Are you a fan of Strike Back? Are you glad both Stapleton and Winchester are returning?

Can’t wait to see them back. Hope they can make more appearances as I love this show!!!

So excited they will be back. I think there chemistry of there smart comments is what makes the show. They are awesome actors and easy on the eyes also.

Yippie! It’s refreshing to see Scott and Stonebridge Again. I wished that they started season 6 from the beginning I also hope that Martinez from season 5 makes an cameo appearance sometime in the future. Let the shootout and the explosions begin!

Best news I’ve heard! Still having trouble getting use to new season with new cast. It just doesn’t seem the same without Stapleton and Winchester

Love them!!! Glad to see them come back. Still trying to get into the reboot

Best action series on television….hands down!!

Yes glad to see them back if only for 2 episodes

Yes I think it is a great show full of entertainment and a plausible story line. I am not a fan of the new reboot so having Sullivan Stapleton and Phillip Winchester returning might give the series some credibility.