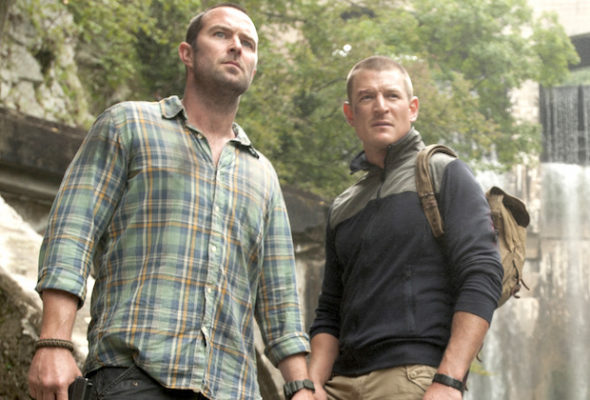 Will Strike Back be back for another mission? Recently, stars Philip Winchester and Sullivan Stapleton spoke with TVInsider about the future of the Cinemax TV show.

Winchester: It would all depend on Sully. I don’t think we can capture the lightning in a bottle that we had without each other. He’s my buddy. If he was on board, and there was an offer, we’d make it work.

Cinemax has yet to announced a season seven renewal for Strike Back. The odds seem unlikely since ratings for this season have been low. So far, season six is averaging a .02 rating in the 18-49 demo and only 119,000 viewers.

What do you think? Do you watch Strike Back? Would you watch a seventh season if Winchester and Stapleton returned full time?

Stopped watching it after the two left. They had good chemistry that made the show worth watching. Never change a winning game!

Please come back guys yu 2 made the show , great chemistry

strike back is the BEST, most action-packed series i’ve ever watched! i would watch 400 seasons of this show!, as long as winchester and stapleton are the main guys.

I would most definitely be up to watch my two favorites of Strike Back. Seasons 1-4 were awesome and I miss the two of them, their banter, their bad-ass attitudes, and Damien’s backside as well. They just rock as a team…. Kudos to the new team for trying to capture the spirit of the show, but I just am honestly not into the show as I once was. If Scott and Sonebridge were to return full time, I’d be one full-time happy viewer and fan.

I love the show. Stapleton and Winchester are great . I loved seeing them for last years finale. I vote for them to come back . Thanks

I would absolutely watch if they continue with season 7 and would love it if Phillip and Sully were a part of it!

I really enjoyed Season 6 with the new cast and seeing Scott and Stonebridge was awesome! I really like the vibe between Phillip, Sullivan, and Alin. I’d love to see both casts again. Hard to beat the original crew. Cinemax needs to advertise the show better. I had no clue that Season 6 even existed until I scrolled thru on demand. I think the poor ratings are related to poor advertising.

I agree they need more advertising. I also found out by accident.

They tried to mimic the chemistry between Stapleton and Winchester but it was lacking. It was still worth watching. I would love to see them return for the series or a stand alone movie. Together they shine.

They have to return. Together they are magic

I would watch it either way. I’m liking the new cast a lot. The return of Phillip and Sully would be amazingly awesome from time to time. Like in this season’s ender.
Way to kick some ass, boys!

According to an article dated March 27th, SB has been renewed for a 7th season.

I saw that too! That makes me happy. I think the group in S6 are just starting to come together. It takes a bit for everything to mesh.

oh yes ,no brainer sure hiy

The latest season was extremely disappointing. The girls were good, but the men had zero chemistry.