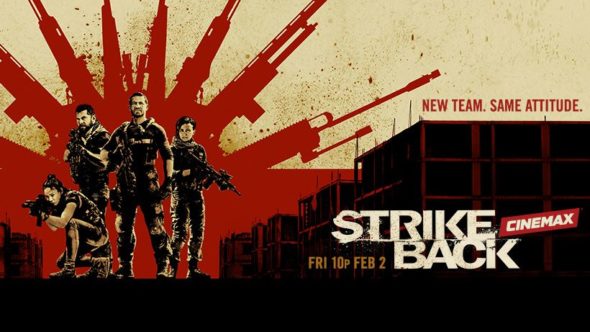 Although the Strike Back TV show was originally cancelled in 2015 after five seasons, now Cinemax and Sky have revived the action-adventure series for a sixth installment with a new cast. Can it bring back the old fans and attract new ones? Will Strike Back be cancelled or renewed for season seven? Stay tuned.

A spy drama, Strike Back season six stars Warren Brown, Daniel MacPherson, Roxanne McKee, and Alin Sumarwata. The Cinemax cast also includes Nina Sosanya, Katherine Kelly, and Trevor Eve. Although once disbanded, Section 20 is restored to track down a dangerous terrorist who has escaped from prison. As the team travels through Europe and the Middle East, they discover a lethal conspiracy which endangers them all and could change everything. **Update below.

Note: This is considered the sixth season in the UK where the series originates. Cinemax picked up the show starting with season two in 2011. Then, in 2013, they went back and aired the first season of six episodes as a special mini-series called Origins.

For comparisons: The fifth season of Strike Back on Cinemax averaged a 0.09 rating in the 18-49 demographic and 240,000 total viewers.

What do you think? Do you like the Strike Back TV series? Are you glad it has returned? Should Strike Back be cancelled or renewed for season seven on Cinemax? Sound off, in the comments.

**3/27/2018 update: Cinemax has renewed Strike Back for a seventh season. Details here.

Yayyyyyy season 7 any hopefully many more

Season 1-4 with Sullivan Stapleton and Phillip Winchester was great. It was a little weak in season 4 with Scott’s kid and that horrible story but it ended really well. Season 5 with the new cast totally sucked. The story was lame the acting and follow through was lacking as well. Needless to say the was disappointing.

Wonder what will happen to Section 20 in Season 7! Looks like their overseer is a bad lady. I hope she is taken out by Section 20. Who will be the new leader – the Captain Reynolds to replace Colonel Donovan? Or someone more politically connected? And who will be the tech guy or gal? Who will they go after?

So glad Strike Back is back. Love the story line and action. Something going on constantly.

Thank you for renewing Strike Back. Best show on TV. Watch all the old episodes all the time. Love the action, drama and scenery. The characters are great. The storylines are great. Just a great show. Now just waiting for the movie

Just bad. Strike back was never deep TV, but it was the best show ever for juvenile male fantasy – boobs, guns, explosions. Adding stupid propaganda isn’t going to make the Lena Dunham crowd like you, but it is going to make the only people who ever watched this hate you.

Great show look forward to the action and story line.

Just watched episode 5. Wow! There was one really intense scene that reflects the essence of the show. That would be the one where the two lead beta males were tied up in the same room as the terrorist….sharing gossip & giggles. I really hate that I’ll miss the next episode where the betas mensies sync up & they braid each others hair while sipping on white wine coolers & swooning over the latest issue of Modern Bride. The only way Stapleton & Winchester could salvage this dreck is if they slaughter everyone on the program…including the writers.

This show is feminist garbage. The men are beta males and the first thing one of the women does is criticize the “American” (I put it in quotes because he’s acting as an American–but he isn’t a good actor) for having a small *****. The lesbian haircut chick is about 100lbs but picks up a man over her head and slams him down on exposed rebar. The men don’t even get to have a fist fight until most the way through the season. Meanwhile, the lesbian haircut chick manages to get into a fist fight most every episode. The men… Read more »

Whew! Someone roll down the windows & let the stench out. Beyond pathetic. Winchester & Sullivan were a great team with a solid supporting cast. SB was farcical, fun & entertaining. The only good thing left from the original is the opening theme song. The current two beta male leads are a sad parody of the originals. The women have more individual testosterone then the men combined. I’m rooting for the terrorists.