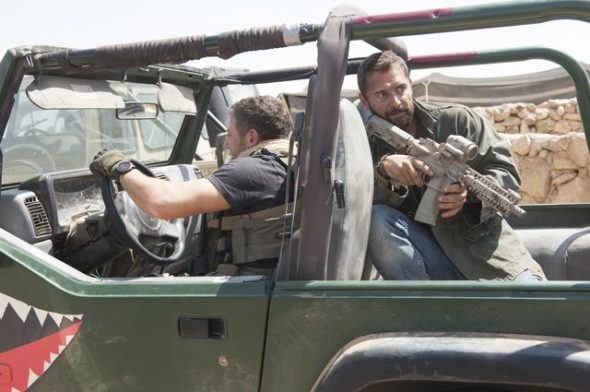 Does the new Section 20 team get the job done during the sixth season of the Strike Back TV show on Cinemax? As we all know, the Nielsen ratings typically play a big role in determining whether a TV show like Strike Back is cancelled or renewed for season seven. Unfortunately, most of us do not live in Nielsen households. Because many viewers feel frustration when their viewing habits and opinions aren’t considered, we’d like to offer you the chance to rate all of the Strike Back season six episodes here.

A Cinemax action-adventure spy drama, Strike Back stars season six stars Warren Brown, Daniel MacPherson, Roxanne McKee, Alin Sumarwata, Nina Sosanya, Katherine Kelly, and Trevor Eve. Although once disbanded, Section 20 is now restored to track down a dangerous terrorist who has escaped from prison. As the team travels through Europe and the Middle East, they discover a lethal conspiracy which endangers them all and could change everything.

What do you think? Which season six episodes of the Strike Back TV series do you rate as wonderful, terrible, or somewhere between? Should Cinemax cancel or renew Strike Back for a seventh season? Don’t forget to vote, and share your thoughts, below.

The only episode worth watching was when Sullivan Stapleton and Phillip Winchester made a cameo. Every episode sucked and was poorly written and it just felt rushed and contrived to make something happen. The ending finale was ridiculous and had no real meaning on the episodes. It’s like they ran out of ideas for the show. The old cast was so much better and the episodes flowed very well from one to another. Even the silly banter with the new cast just didn’t work well. I was extremely disappointed.

I loved Season 6. Although I loved Scott and Michael, the new cast is a great mix of badass, humor, and skill sets. The story line was awesome. It was great to see Scott and Michel in the last 2 episodes. I missed my guys. I was sorry that Will died. I thought he added the right amount of nerd. Please renew for season 7

Great show, I enjoyed watching the new cast, and that the drama kept to the original formula of an American joining a U.K. military unit. The girls were great and brought some serious girl power to the screen. The two guys are as convincing as the original cast and do really well following in their footsteps, which cannot have been easy.

new SB is so sucked. Actors, cameras, fights,story – everything just sucks.
Get back Scott and Michael.

I think Strike Back is one of the best ‘covert ops’ shows,ever. Yes, I loved the original cast, and would have loved to see them come back. However, one is in the show “Blindspot”,. and is good in it; still, I liked him better in Strike Back. The other actor (I am bad with names) was great in Strike Back, but, the Chicago Law was definitely not for him, and it got cancelled. So,maybe he can be found a role in the new Strike Back. Personally,the theme song is my all-time favourite by “The Heavy” of England…(the second is “How… Read more »

Section 20 has not been restored, 2 restore U must use the same cast from Seasons 1-5. This should not B called Season 6 as it has a whole new cast. This is so hypocritical. Cancelling a great show and then 2 call the new version the next season. Bring back the previous cast!

This is a great exciting show. The new cast is good. I liked the old cast but they has to move along when the show was cancelled. I will watch