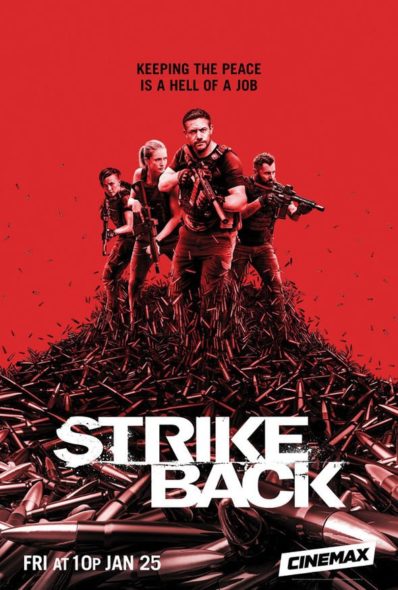 Are the soldiers of Section 20 still giving it their all during the seventh season of the Strike Back TV show on Cinemax? As we all know, the Nielsen ratings typically play a big role in determining whether a TV show like Strike Back is cancelled or renewed for season eight. Unfortunately, most of us do not live in Nielsen households. Because many viewers feel frustration when their viewing habits and opinions aren’t considered, we’d like to offer you the chance to rate all of the Strike Back season seven episodes here. *Status update below.


Note: This is considered the seventh season in the UK where the series originates. Cinemax picked up the show starting with season two in 2011 (and some materials number this as season six). Then, in 2013, they went back and aired the first season of six episodes as a special mini-series called Origins.

What do you think? Which season seven episodes of the Strike Back TV series do you rate as wonderful, terrible, or somewhere between? Should Cinemax cancel or renew Strike Back for an eighth season? Don’t forget to vote, and share your thoughts, below.

*2/27/19 update: Cinemax has renewed Strike Back for an eighth and final season.

One of the best series of action that I’ve seen lately, renew it every year, hopefully Michael Stonebridge and Damien Scott will return

PLEASE bring back for several season. Season was grate, if fact the whole series has been great,

I hope they keep strike going forever. This last season was the best.

Please renew Strike Back for an Eighth season. This show is the best there is for Friday nights at 10pm. It’s action packed and full of excitement. All of the actors that have been on this show, have given their own charisma to it and left it there. It’s not worth an 8th season, but up to a 10th…….GO STRIKE BACK❤