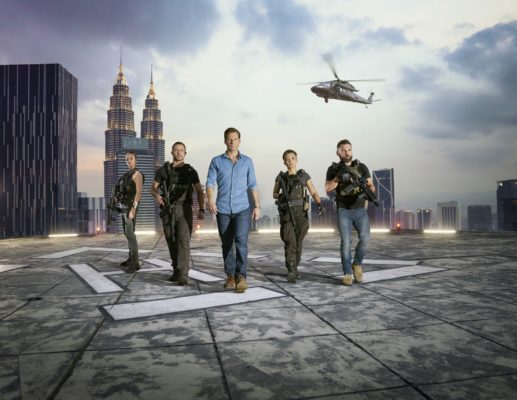 Strike Back is back in action. This week, Cinemax announced the TV show’s sixth season has begun filming.

Cinemax has ordered 10 episodes of Strike Back for season six (note: this is considered season seven in the UK). A premiere date has yet to be announced. Read more info below:

When a Russian bomber crashes in the South China Sea, the covert special-ops soldiers of Section 20 — Thomas “Mac” McAllister (Warren Brown), Samuel Wyatt (Daniel MacPherson) and Gracie Novin (Alin Sumarwata) — are sent on a mission to investigate. There, they cross paths with Katrina Zarkova (Yasemin Allen), a rogue Russian operative with questionable loyalties.

Under orders of the new commanding officer, Col. Alexander Coltrane (Jamie Bamber), Section 20 pursues stolen contents of the Russian jet across Southeast Asia. They will work alongside the Malaysian police to shut down a Triad gang in Kuala Lumpur, uncover a corrupt plot by a wealthy Indian businesswoman running for Parliament and plunge into the jungles of the Golden Triangle in Myanmar, facing off against mercenary drug agents and terrifying warlords, as they uncover a conspiracy that threatens to push the world to the brink of global conflict.

“STRIKE BACK has reestablished CINEMAX as a destination for adrenalized, entertaining action series,” notes Kary Antholis, president, HBO Mini-series and CINEMAX Programming. “We are delighted to offer Section 20 the opportunity to continue saving the world from mayhem and destruction.”

Among the critical praise for the series, TVGuide.com described the previous season of STRIKE BACK as a “visually stunning” show that “regularly delivers action sequences on par with many feature films.”

This new season marks CINEMAX’s sixth — and UK co-producer Sky’s seventh — in the STRIKE BACK franchise. In 2013, CINEMAX aired Sky’s first season of the series as “Strike Back: Origins.”

What do you think? Have you seen Strike Back? Will you watch the upcoming season?

Anytime there’s a reboot of a successful cast and continuing plot line it’s going to be rough. I loved the original guys and was glad to see them in for a guest spot. But the new guys seem to have grown into their roles and at least in my experience as a former U.S. Army Infantry Captain, the tactics and weapons handling seem sound. Give ’em a chance. I hope that the Rogue Russian is the same blond female sniper from the concluding episodes of the previous cast. I love the original and continually re-watch it. But I like the… Read more »

The last season was the disappointment of the year.

The good news? There is absolutely no way this season could suck as much as last season. One caveat. If they make the “men” wear a combat dress…that would make it worse.