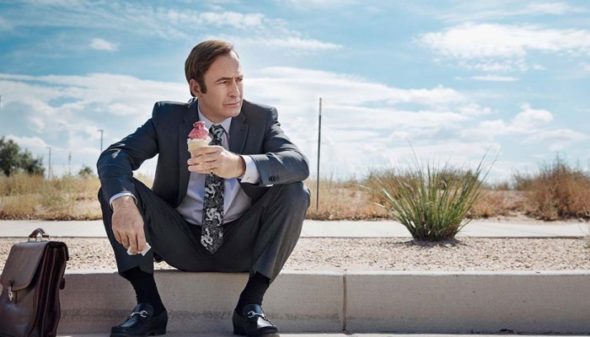 Are you ready for the new season of Better Call Saul? AMC just announced the TV show’s fourth season and the new series Lodge 49 will debut this summer.

Meanwhile, Lodge 49 “is a light-hearted, endearing modern fable set in Long Beach, California about a disarmingly optimistic local ex-surfer, Dud, who’s drifting after the death of his father and collapse of the family business.” The cast includes Wyatt Russell and Brent Jennings.

Season four of Better Call Saul premieres on AMC on August 6th at 9 p.m. ET/PT, followed by the series debut of Lodge 49 at 10 p.m. ET/PT.

NEW YORK, NY – May 31, 2018 – AMC announced today an August 6 premiere date for its original series “Better Call Saul” and “Lodge 49.”  Season four of the critically acclaimed and Emmy®-nominated “Better Call Saul,” produced by Sony Pictures Television, will air Monday, August 6 at 9:00 p.m. ET/PT immediately followed by the series premiere of “Lodge 49” at 10:00 PM ET/PT.  Both series will have a presence at the ATX Television Festival, taking place June 7-10 in Austin, Texas, including a panel with “Better Call Saul” executive producer Vince Gilligan and star Bob Odenkirk, and a sneak peek screening of the “Lodge 49” premiere followed by a panel with stars Wyatt Russell and Brent Jennings and executive producers Peter Ocko and Dan Carey.

“Monday nights have become a destination for our character-driven dramas, and we loved the idea of pairing these two series, which are similar in their darkly comedic tone and led by two charming yet complicated characters facing huge life moments,” said David Madden, president of original programming for AMC, SundanceTV and AMC Studios. “We’re excited to share the next chapter in Jimmy McGill’s journey towards Saul on one of television’s most celebrated shows, and to introduce viewers to the unfailingly optimistic underdog Dud, who’s looking for his place and his moral purpose in a cynical and confusing world.”

In “Better Call Saul’s” fourth season, Chuck’s death catalyzes Jimmy McGill’s (Odenkirk) transformation into Saul Goodman. In the wake of his loss, Jimmy takes steps into the criminal world that will put his future as a lawyer – and his relationship with Kim (Rhea Seehorn) – in jeopardy.  Chuck’s (Michael McKean) death deeply affects former colleagues Howard (Patrick Fabian) and Kim as well, putting the two of them once again on opposite sides of a battle sparked by the Brothers McGill.

Meanwhile, Mike Ehrmantraut takes a more active role as Madrigal Electromotive’s newest (and most thorough) security consultant.  It’s a volatile time to be in Gus Fring’s employ, as Hector’s collapse sends shock waves throughout the Albuquerque underworld and throws the cartel into chaos — tearing apart both Gus and Nacho’s well-laid plans.  While Gus changes course, Nacho finds himself in the crosshairs of deadly forces.

“Lodge 49” is a light-hearted, endearing modern fable set in Long Beach, California about a disarmingly optimistic local ex-surfer, Dud (Russell), who’s drifting after the death of his father and collapse of the family business. Dud serendipitously finds himself on the doorstep of a rundown fraternal lodge, where a middle-aged plumbing salesman and “Luminous Knight” of the order, Ernie (Jennings), welcomes him into a world of cheap beer, easy camaraderie and the promise of Alchemical mysteries that may — or may not — put Dud on the path to recover the idyllic life he’s lost.  Jim Gavin (Author, Middle Men) serves as creator, writer, and executive-producer alongside showrunner Peter Ocko (Pushing Daisies, The Office).  Additional executive producers include Paul Giamatti (“Billions,” Sideways, Outsiders, Hoke), Dan Carey (Outsiders, Hoke, John Dies at the End, All Is Bright) and Jeff Freilich (“Halt and Catch Fire,” “Grace and Frankie”).”

What do you think? Do you watch Better Call Saul? Will you check out Lodge 49?