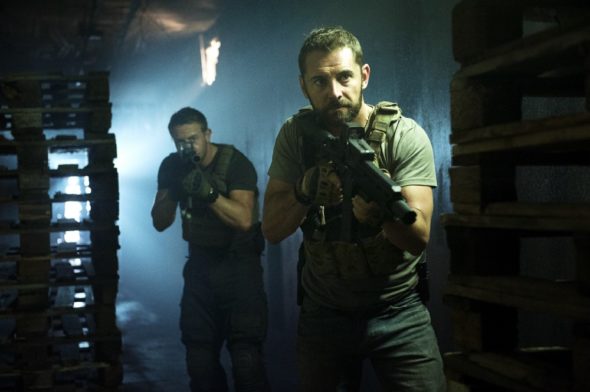 Never fear, Section 20 is still here. The Strike Back TV show has been renewed for a seventh season. Cinemax refers to this as a season six renewal, because the subscription cable network picked up the British-American TV series, starting with season two in 2011. In 2013, they then went back and aired the first season of six episodes as a special mini-series called Origins.

A Cinemax action-adventure spy drama, in its sixth season Strike Back stars Warren Brown, Daniel MacPherson, Roxanne McKee, Alin Sumarwata, Nina Sosanya, Katherine Kelly, and Trevor Eve. Although once disbanded, Section 20 is now restored to track down a dangerous terrorist who has escaped from prison. As the team travels through Europe and the Middle East, they discover a lethal conspiracy which endangers them all and could change everything.

Strike Back: A Look at the Ratings

While those ratings are low enough that a cancellation wouldn’t have been a surprise, the show is a co-production with UK’s Sky One, which likely helped save it. Learn how Strike Back stacks up against the other Cinemax TV shows.

Learn more about the Strike Back renewal, from this Cinemax press release.

CINEMAX has renewed the action series STRIKE BACK for a sixth season, it was announced today by Kary Antholis, president, HBO Mini-series and CINEMAX Programming. Currently debuting episodes Friday nights (10:00–11:00 p.m. ET/PT), with the fifth-season finale scheduled for April 6, the show follows the explosive escapades of Section 20, an elite, multinational, covert special ops team, as it spans the globe fighting a vast web of interconnected criminal and terrorist activity.

“The rebirth of STRIKE BACK has reestablished CINEMAX as a destination for adrenalized, entertaining action series,” noted Antholis. “We are delighted to offer Section 20 the opportunity to continue saving the world from mayhem and destruction.”

Among the critical priase for the series, TVGuide.com described the current season of STRIKE BACK as a “visually stunning” show that “regularly delivers action sequences on par with many feature films.”

The next season will mark CINEMAX’s sixth, and UK co-producer Sky’s seventh, season in the STRIKE BACK franchise. CINEMAX began airing the series with Sky’s second season, and in 2013, presented Sky’s first season of the show as “Strike Back: Origins.”

What do you think? Are you a fan of the Strike Back TV series. Do you plan to watch the next season on Cinemax? Sound off, in the comments.

I loved to original cast of the show a bit more for the slightly unsettled buddy elements and it seemed to me that the tactical aspects were more realistic. I’m speaking only as a Cold War era former infantry captain in the U.S. Army, but I’m also a competitive shooter and was so in the army and I’ve been an NRA Instructor for 30+ years. I’d say the cast seemed well trained. The new guys were a bit odd at first, but they’re growing on me and they too, seem to be settling well into their roles. Not too sure… Read more »

I am looking forward to the upcoming new season ; let the shooting begin!

Best action show on TV. Watched every episode at least 3 times. liked the first 4 seasons better than season 5 but I still liked the new actors.

At the beginning of the season I was skeptical with the new cast. However, they have grown to fill in the shoes of the original cast. Great show, looking forward to their return in season seven.

I love this show it is my go to action series