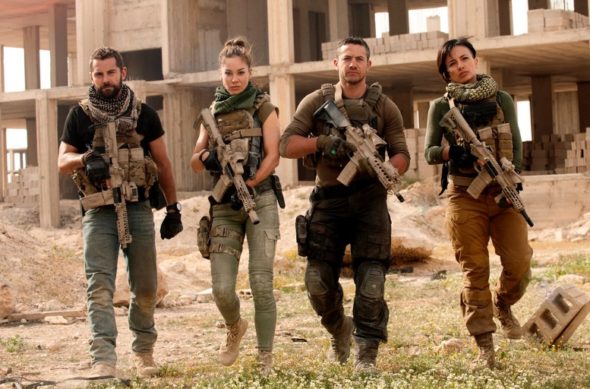 Is Section 20 still on the job? Is the Strike Back TV show cancelled or renewed for a seventh season on Cinemax? The television vulture is watching all the latest cancellation and renewal news, so this page is the place to track the status of Strike Back, season seven. Bookmark it, or subscribe for the latest updates. Remember, the television vulture is watching your shows. Are you?

A Cinemax action-adventure spy drama, Strike Back season six stars Warren Brown, Daniel MacPherson, Roxanne McKee, Alin Sumarwata, Nina Sosanya, Katherine Kelly, and Trevor Eve. Although once disbanded, Section 20 is now restored to track down a dangerous terrorist who has escaped from prison. As the team travels through Europe and the Middle East, they discover a lethal conspiracy which endangers them all and could change everything.

The sixth season of Strike Back averaged a 0.02 rating in the 18-49 demographic and 120,000 viewers. Compared to season five, that’s down by 76% and 50%, respectively. Learn how Strike Back stacks up against the other Cinemax TV shows.

Season six premiered with much lower ratings than the fifth season and they’ve dropped much lower in later weeks. Though Cinemax doesn’t depend on ratings like regular commercial channels, they do need to make programming that people want to watch. It doesn’t seem like there’s much of an audience for this revival thus far. For now, I’ll keep an eye on the Nielsens and update this page with breaking news. Subscribe for free Strike Back cancellation or renewal alerts.

3/27/2018 update: Cinemax has renewed Strike Back for a seventh season. Details here.

What do you think? Do you hope the Strike Back TV show will be renewed for a seventh season? How would you feel if Cinemax cancelled this TV series, instead?

That’s great news, as long as some of the original characters stay in business, the success is guaranteed.

A tractor pull in Iran would draw more viewers than this sad train wreck of a once entertaining series.