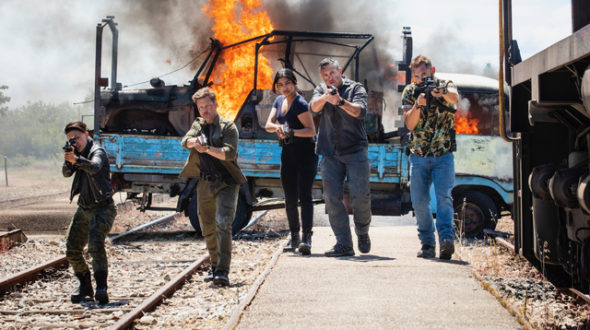 We don’t have to worry about Strike Back being cancelled this time around since its already been announced that season eight (including the prequel season) is the end. But, will it stick this time? Longtime viewers will remember that Strike Back was cancelled after six seasons in 2013 but was revived years later. Can it happen again? Will there be a ninth season someday? Stay tuned.

For comparisons: Season seven of Strike Back on Cinemax averaged a 0.02 rating in the 18-49 demographic and 107,000 viewers.

What do you think? Do you like the Strike Back TV series on Cinemax? Should it have been renewed for a ninth season?

Strike Back is one of my favorites. I love the action and witty dialogue along with intense and sad moments. It has it all. The biggest problem is that Cinemax didn’t advertise enough and it should have sold the rights to the first couple of episodes. People are not seeing it. Trust me, it is a winner. This last episode was really sad, but with some new people it would still be great!! I signed up to Cinemax to watch last the final season. Now I have cancelled my subscription. It needs to go to Prime or Netflix.

strike back is a brilliant show great action and stars, please commission a series nine , best drama action show out .!!!!!!

Damn, the rating is just heart breaking. Cinemax should do a better job on ads and promotes….
Well, too late to say it now

Been watching the show since day one and just love it!! Adrenaline packed, both funny and clever and with great performances throughout. Let the journey continue, give us season 9!!!