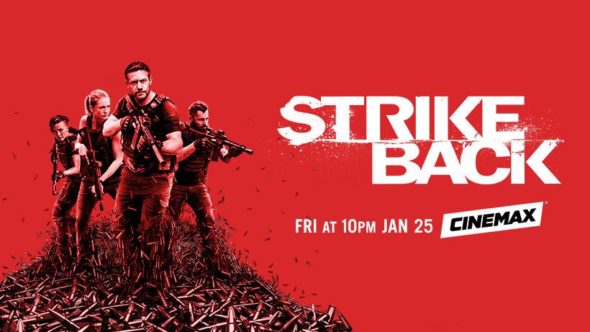 Cancelled in 2015 after five seasons, last year, Cinemax and Sky revived the Strike Back TV show with a new cast. Although its Nielsen ratings were way off from those of the original series and downright microscopic overall, now it’s back for a seventh season. How long can it cling to life? Will Strike Back be cancelled or renewed for season eight? Stay tuned. *Status update below.

Note: This is considered the seventh season in the UK where the series originates. Cinemax picked up the show starting with season two in 2011 (and some materials number this as season six). Then, in 2013, they went back and aired the first season of six episodes as a special mini-series called Origins.

For comparisons: The sixth season of Strike Back on Cinemax averaged a 0.02 rating in the 18-49 demographic and 120,000 total viewers.

What do you think? Do you like the Strike Back TV series? Should Strike Back be cancelled or renewed for an eighth season on Cinemax? Sound off, in the comments.

*2/27/19 update: Cinemax has renewed Strike Back for an eighth and final season.

I’ve coughed up things more entertaining than this travesty. Bring back Winchester & Stapleton.

Amen Brother …..They had the chemistry that made the show work! Maybe Winchester and Stapleton could break away from their current TV gigs to make a Strike Back movie together.

Agreed. I’d prefer to see Winchester and Stapleton return to do a SB movie every two years or so rather than continue this weaker version of the TV series. I believe producers were looking at doing that (movies with W&S) before they decided to revive the series. Movies would mean bigger budgets, more locations, bigger action sequences.