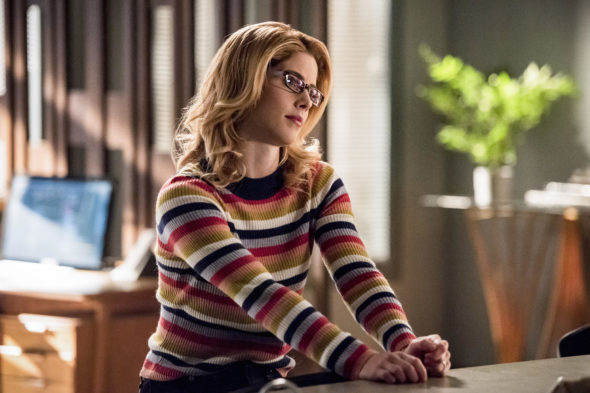 A big change is coming to Arrow. TVLine reports star Emily Bett Rickards will be leaving the CW TV show after its seventh season.

On social media, Rickards announced she is leaving Arrow ahead of the The CW series’ eighth season. See Rickards’ statement and reactions from the cast and creators below:

We’ve had the pleasure of working with Emily since Season 1 and in those past seven years she has brought one of TV’s most beloved characters to life,” the statement reads. “And although we’re heartbroken to see both Emily and Felicity leave the show, we’re completely supportive of Emily and her future endeavors. She will always have a family at Arrow.”

What do you think? Are you a fan of Arrow? Are you sad to see Felicity go?

It seems silly to leave a show prior to the finale, but with last season’s finale which has Green Arrow discussing the Crisis with the Monitor, I’m assuming that Felicity won’t have a lot of screen time for the final season.

Disappointed in her for not staying for the abbreviated upcoming season 8. Why leave early?

IT TRULY SUCKS THAT SHE’S LEAVING !!! IT ALSO TRULY SUCKS THE SHOW IS ENDING TOO. AT LEASE THEY COULD HAVE GIVIN IT A LONGER FINALE SEASON!! HOPEFULLY STEVEN & EMILYWILL GET ANOTHER SHOW POSSIBLY TOGETHER AGAIN IN SOME WAY. THEY ARE BOTH WAY TO GOOD NOT TO BE SEEN ON AMERICAN TV AGAIN.

I love the show. Sad to see it go. I would rather see DC Legends go.

There’s no show without her I’m not watching it

I’m sad for all of them to go. But I think that since it’s an abbreviated season they could have done it. Now it won’t be the same so why bother watching when 2 of the main characters do. The main star of Nashville pulled the same thing and the series tanked after that

Are they finally going cannon with comics ? are we fixing to see Laura & Ollie ? Be nice

I have been a fan of Emily (Felicity) from the beginning. Out of all of the characters Arrow has dated she make the most sense for his character. Some say she was needy, what do you expect a wife to be. Showing her need for him kept that line down between husband and super hero which brings a balance. Therefore, letting her go might not be the shows best interest.
I am just saying!

It appears the show should end immediately, with that is, an excellent good bye to the millions of fans who love this show, including me.
Anything less would send the arrow into the T.V. abyss.
I for one, have a disconnection with Ms Rickards leaving prior to one more season. Why would a person who claims to care for her cast members and fans, then abruptly leave before the final curtain call. (Something Smells).
If she cannot move forward under the current circumstances, let it be a wrap!

She’s the perfect example of how to ruin a character. She was awesome early on and over time they decided to make complain non stop, never admitted when was wrong etc, they ruined her.

They also failed her on some tech stuff. Techs pronounce SQL (Structured Query Language) as sequel. In two (or more) episodes she talked about doing an S-Q-L injection attack instead of a Sequel injection attack. There were other examples, but this is a very basic mistake that completely destroyed her credibility as tech savvy.

Her leaving is disappointing in the sense that they spent so much time in the “flash forwards” where she was a big part of the story. They only way they can write her out is to have her leave Star City with Mia.

Not a fan of her, too needy!