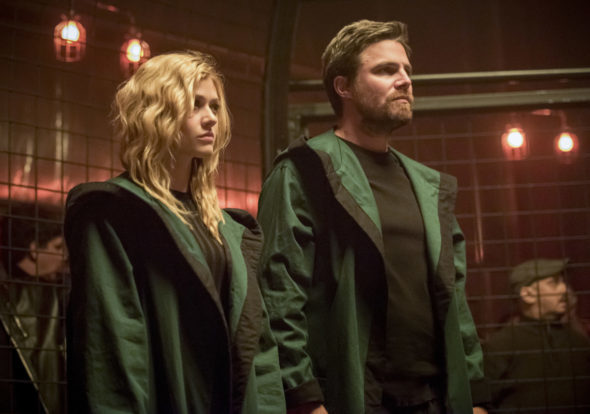 Arrow is currently airing its final season on The CW, and the cast and crew took their social media accounts on Thursday to reveal the series had wrapped production on the finale. Many members of the cast, including the star of the series, Stephen Amell, said good-bye to the series.

Arrow premiered its first episode on The CW on October 10, 2012. The finale for the series will air on January 28, 2020. Ratings for the series declined over the years. Currently, season eight is averaging 749,000 viewers a week.

A spin off featuring Katherine McNamara, Katie Cassidy Rodgers, and Juliana Harkavy is already in the works.

Check out the messages sent by the cast and crew of Arrow on Thursday below.

Words can’t even begin to express what Arrow has meant to me. Best 8 years of my life. The cast and crew of the show have become my family. I’m going to miss them. I’m wrapped.

During my last week on Arrow, a lot of things fill my mind… but mostly family… #Arrow

#ARROW my fam bam! The amount of love and respect I have for this brilliant cast is insane. I couldn’t imagine the long nights with anyone else 🖤 I can’t believe it’s coming to the end. You all have inspired me in so many ways and I’m blessed to have been apart of this incredible journey. Thank you all for being you. I love you dearly! 🙏🏼💕💕🙏🏼

I took this photo almost 4 years ago. I’d just gotten off a call with Warner Bros. where I learned my life was about to change forever. My journey on Arrow had begun, and I would be moving to Vancouver in a few days. I took this picture because I wanted to remember the feeling I had in that moment. The overwhelming excitement. The immense gratitude. At the time I had no idea where this adventure would lead. I didn’t know this show would have such an outstanding lifespan, or how many people, young and old, I would be able to meet and help through playing this character. Or how they would help me. Most of all, I didn’t know the greatest gift was waiting on the other side of the border. My cast. Who would welcome me with open arms and become my greatest source of strength. My soulmates. My family. And Stephen, our gracious and unwavering leader, to whom I am eternally grateful. Today begins our last week on Arrow. As thankful as I felt the day this photo was taken, nothing could describe how much that love and gratitude has grown. I am so proud of our cast, crew, writers, and producers. I hope you enjoy this final season. And I hope when you look back, you’ll find this story has moved you, inspired you, and changed you for the better. Because of #Arrow, I have been changed, for good. Thank you, thank you, thank you. 🖤🏹

Today is the last day of filming for #Arrow. I still remember what I was wearing for my audition, what the room was like, my mind being blown that I was cast, my first flight to Vancouver, walking into my first hotel room, the first fitting…

Today is the last day on Arrow. The last day I will get to go to work with these beautiful humans on a show that gave me so much. These ppl were with me through all the good & sad times & helped me through more than I can ever repay them for. Thank you @gberlanti for bringing me on this wonderful journey & to all the incredible writers, producers, cast, crew, & FANS for being so incredible all these yrs. ❤️❤️❤️

Arrow will return with new episodes on November 19.

What do you think? Are you a fan of Arrow? Are you sad to see production on the series end? Will you watch the spin-off of the series?

I WOULD WATCH ANY & ALL SPIN OFFS OF ANY OF THE SHOWS IN THE ARROWVERSE NO MATTER WHAT THEY ARE!!!!

I WOULD WATCH THE ARROW NEW SPIN OFF BIG TIME. THERE NEEDS TO BE A LOT MORE WITH ALL OF THOSE ACTORS. THEY ARE SOME OF THE ALL TIME BEST ACTORS & ACTRESS IN THE BUSINESS NO IF & OR BUT’S ABOUT IT PLAN & SIMPLE!!!!

I agree seems like every time a good show is found and gets to the point where folks get what the show is all about they drop it ???? Why even air the show in the first place ?? It sure makes one wonder why they do it ??? Seems like just when the show gets to some of the best part of it they turn up the music so there goes the show trying to hear the actor but instead one hears a want to be MUSICAN ??? I wish they would leave ARROW on but I do have… Read more »

I am so very sad to see this series come to an end. It has been an awesome show from the beginning. I hope Stephen Amell comes back to another series, or has something in already progress. I’ll miss all the Actor’s and look forward to seeing more of them soon! Love you guys!