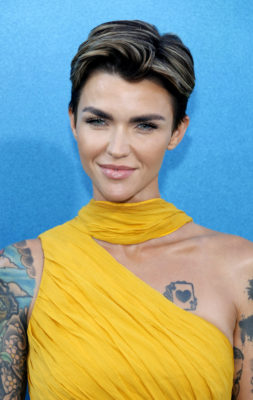 Ruby Rose is coming to The CW. This week, the network announced the Orange is the New Black star will star in season seven of Arrow.

Rose’s appearance on Arrow is just a precursor to The CW‘s Batwoman series, which is being developed for the 2019-2020 season. You can read more info about the crossover episode below. Season seven of Arrow premieres on October 15th at 8 p.m. ET/PT.

Ruby Rose has been cast as “Batwoman” to appear in The CW’s DC Crossover Event in December. As previously announced, the BATWOMAN series is in development for the 2019-20 season.

Logline: Armed with a passion for social justice and a flair for speaking her mind, Kate Kane soars onto the streets of Gotham as Batwoman, an out lesbian and highly trained street fighter primed to snuff out the failing city’s criminal resurgence. But don’t call her a hero yet. In a city desperate for a savior, Kate must overcome her own demons before embracing the call to be Gotham’s symbol of hope. Based on the characters from DC.

What do you think? Are you a fan of Arrow? Are you excited for the Batwoman crossover?

i found out that there might be a batwoman series coming i hope they change there mind about that and come up with something else i rather there be a all new superman series or a green lantern series or the super friends..