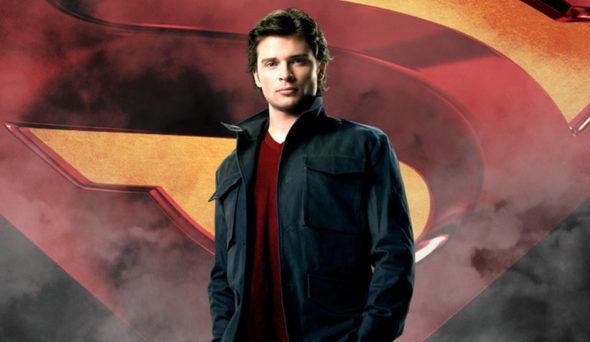 Tom Welling is putting his cape back on. Deadline reports the Smallville star will reprise his role for the CW’s DC Arrowverse.

Welling will reprise his Smallville role for The CW‘s annual Arrowverse crossover. He joins fellow Superman stars Brandon Routh, who played Clark Kent and Superman in the film Superman Returns, and Tyler Hoechlin, who plays Superman in Supergirl.

For eight years, Arrow has stood on the shoulders of Smallville. Simply put, there would be no Arrow, and no Arrowverse, without it. So when we first started talking about Crisis on Infinite Earths, our first, second and third priorities were getting Tom to reprise his iconic role as Clark Kent. To say that we’re thrilled would be a Superman-sized understatement.”

What do you think? Are you a fan of Smallville? Do you watch The CW’s DC shows?

Now, we’re having Black Lightning and Smallville crossing over in Crisis on Infinite Earths. What are the chances for Lois & Clark: The New Adventures of Superman and Birds of Prey?

Great! Waited for this. N finally. Looking forward to his return. My favorite cute, tom.
The cast was so good together. Welcome back!
Thanks.

DUDE !!!! I’m Blown Away !!! I was always Hoping to see Welling as some kind of Clark or Superman related role again ! But, I had pretty much given up hope over the last 8 years.
This is COMPLETELY AWESOME NEWS !!! So happy to hear this worked out !!! I will be glued to my TV to watch this episode(s ? ) and I’ll buy the season on DVD – For Sure !!!!

Saddest part is that Smallville was a great show that had a far better Green Arrow, he was charismatic, funny, good looking, pretty close to the comic version. Instead they made a Nolan Batman ripoff, dark, brooding, generic prettyboy version, which isn’t anything like what GA should be like. Just like the movies.

I’m honestly suprised it took them so long to do this. Given that later seasons of Smallville deal with alternate earths and they immeadiatley jumped into that with the Flash series, and with it being the same network, you would think that establishing some continuity right off would have been obvious. Of course we really needed something in the first season of Arrow to ease us into a new Oliver Queen after Hartley killed it for several seasons. And changing him into a Batman knock-off starting off was really awkward. I’m glad they finally got it all smoothed over when… Read more »

So excited for the Cross over I think they should bring the whole justice league from Smallville.

Would love to see Tom back. He was the perfect Clark Kent.Erica should come back also.

Welling famously DIDN’T wear the costume except the last ten seconds of the last episode. That BARELY counts. If he appears as Superman, it will be for virtually the first time.

While I watch Smallville on my supper break at work back in the summer of 2005 was when I caught the ads for Supernatural. Watched Smallville until the end of the series. Will be great to see Tom in the crossover. (I have watched Supernatural from the beginning and will watch it until the end. Also in reruns so I hope TNT or the CW will show them again.

I love all DC and Marvel shows, movies, and/or characters! 🙂