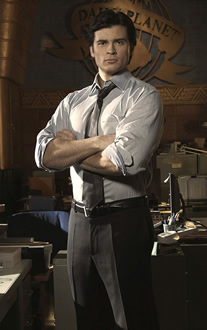 Fans of the young man from Kansas and Krypton can rest easy. The CW TV series Smallville has been renewed for a 10th season.

The series moved to Friday nights this season and, while viewership is understandably down, it’s improved the CW network’s performance on that little-watched night.

Though the show’s strong suit isn’t the CW network’s targeted demographic of young women, the renewal was expected — especially in light of the rest of the network’s schedule. There’s no word yet if season 10 will be the show’s last.

What do you think? Are you glad that Smallville is returning or is it time for the series to end?

I think they should make a Smallvile movie. Smallville shouldnt end with season 10. Tom Welling is the best Superman out there and Smallville will make a great movie.

I hate that its ending! I love smallville. Its one of the shows thats not all about drama and crap left!

i love the thot of lois and clark so yeah am happy smallville is coming. cant wait for ti to start

@esther: It actually started months ago. Perhaps you watch on DVD?

Yes, i am glad that they are keep going its great to see this every week on TV. I only wish that now that Clark &Lois get married , have children to keep this going as for Chloe & Oliver i would like to see them get married to. This is a wonderful show its great to watch .Its a awesome show..Great Job!!!!!!!!Guys keep it up a good fan here…..

Tom Welling is gorgeouse, and by far the best “young Superman out there. I’ve been waiting for him to put the cape on for 10yrs now. There’s really only one question on my mind…Where’s LEX !!!!

Yes… thats the question, where is Lex.

Smallvill has new life if Tom Welling get’s Superman costume, wears glasses , fly’s and Lex comes back. This should not end with season 10 and the rattings will go up with all the new things done and C.D. sales will sell more! Tom Welling are you out there ? Try and keep Smallville alive for season 11 and break all history records!!!

hey smallville fans, season 10….it’s good to know that the best show on tv friday nite’s will be coming back. i hope that season 10 won’t be the last. i have been watching, the show from day one….how about you? i have series 1-8, and why wouldn’t i. it’s like the show and actor’s have become apart of my family. i wish, that some of the actor’s that are no longer with the show were still there, but it’s still great….. and if, season 10 is the last, i just want to say…thanks for the ride!! “SUPER SHOW”

Excited that Smallville is returning by far this is the CW best show it has been from day one. I’ll keep watching. I do enjoying the life before Superman, i can’t wait til he puts on the suit and take flight still waiting for his other best friend to appear Mr Wayne. That’ll be interesting.

YES!! It better be coming back espically after that ending. But they wouldn’t have placed a ‘to be continued’ at the end if it wasnt coming back..would they??

I am so excited ‘Smallville is being renewed. I was anticipating a series finale but was surprised to hear season finale instead of series. I just wish lex wud come back. Though the show Is still awesome w/o him, I loved him being in it. Very disappointmented about life unexpected tho. Love that one too.

I think the Smallville version of the Superman story is an excellent one. I am super-psyched that the show will be going into its 10th season!! I think him starting to fly.. with his red/blue colored suit would be a great addition to the show. Of course, it can’t be added overnight.. it would need to be weaved into the story line. Wow!! That would make this one awesome show, which is already great!! However, the flying needs to coincide (somehow) with Clark Kent wearing glasses on a more regular basis, while he works at the Planet with Lois. Maybe… Read more »