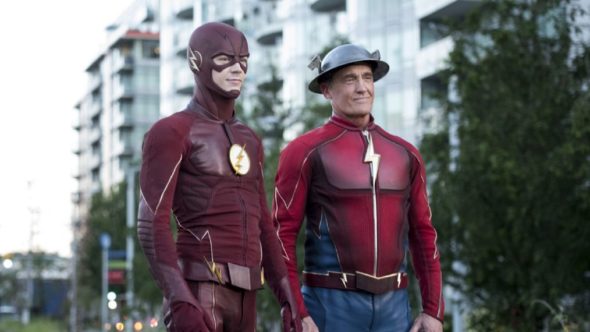 Shipp played Barry Allen (aka The Flash) on the ’90s CBS TV show. He has since appeared on The CW series Barry Allen’s father, Henry, and Jay Garrick (the original Flash).

Shipp will appear during The CW‘s upcoming Arrowverse crossover event, which features new episodes of The Flash, Arrow, and Supergirl. The crossover special premieres on December 9th at 8 p.m. ET/PT.

The buzz today would be remiss w/out a MAJOR shoutout to designer Kate Main & the artists&craftspeople at @oceandriveleather Vancouver’s secret weapon in superherodom. For as we know ‘It Takes a Village’ to reimagine #Flash90 – so grateful ⚡️ @cwtheflash @cw_arrow @thedcuniverse pic.twitter.com/Je8esuNDPZ

After seven years, this just might be the coolest thing we’ve ever done…@JohnWesleyShipp pic.twitter.com/mmpac4k5YE

What do you think? Are you a fan of The Flash? Are you excited for the new crossover special?

Why haven’t the CW haven’t included Black Lighting in the next Crossover??!!