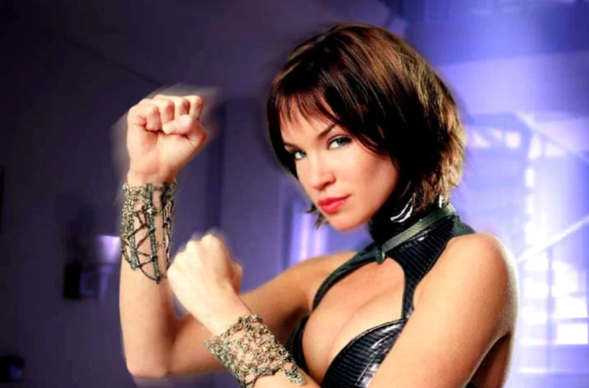 DC’s Arrowverse crossover event is adding even more familiar faces. In fact, The CW went back deep into its past to its WB days for its latest addition. Ashley Scott from Birds of Prey is reprising her role of Huntress for the big event. That series lasted only 13 episodes before it was canceled in 2002. The Huntress has appeared on Arrow in the past, but she was played by Jessica De Gouw.

Ashley Scott is not the only new addition to the event. TV Insider reported that Osric Chau is set for the crossover, as well. The actor appeared on six seasons of Supernatural. More recently, he appeared on Dirk Gently’s Holistic Detective Agency. He joins the cast in a recurring role.

He will play Ryan Choi. It was revealed that Choi will play a “pivotal role” in the Arrowverse event. In the world of DC comics, Choi becomes the Atom after the departure of Ray Palmer. It has already been revealed that Brandon Routh is leaving DC’s Legends of Tomorrow at the end of this season. Is The CW setting things up for Chau to take over the role of Atom next season? Fans will have to wait and see. That series returns to the network in January.

Osric Chao spoke about the casting on his own Twitter account on Thursday. His fans were excited to see the news.

I am so beyond excited that I’ve moved past the point screaming to quiet uncapitalized and unexclaimed typing.
This is not my victory, this is another step in a larger movement. So thank you all for your incredible support, for me, for my friends, for our community, I love you ❤️ pic.twitter.com/Swwt2U13aw

The CW’s big crossover event will premiere on December 8 with Supergirl.

What do you think? Are you excited to see Ashley Scott and Osric Chau on the Arrowverse crossover?

Now, we’re having Smallville, Black Lightning and Birds of Prey crossing over in Crisis on Infinite Earths. What are the chances for Lois & Clark: The New Adventures of Superman crossing over? Just Ashley Scott as Helena Kyle/Huntress? What about her co-stars, Dina Meyer and Rachel Skarsten as Barbara Gordon/Oracle and Dinah Redmond? Will they be back or not?

Rachel Skarsten is co-starring on BATWOMAN. I think the leap isn’t too great to assume that she will be part of the Scott Birds of Prey cameo.